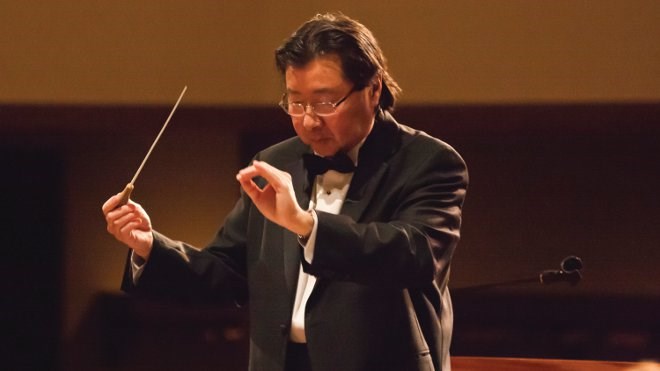 Simply put, he's ready for the big leagues. In the case of a man of his talents, that means leading symphonies in Europe.

It all started when the Regina Symphony Orchestra — which he also conducts — decided not to renew his contract beyond 2015-2016. As a result, he started looking for work elsewhere, and found it in Europe.

That led to a discussion with SSO about Sawa's future. SSO executive director Dawn Cattapan said Sawa and the symphony's board made a mutual decision that this season would be his last.

“As he's doing more and more in Europe, he's not doing two concerts with us this season because of that,” she said.

“He's said to us, 'I don't know how fair it is that I'm kind of splitting my time and I can't be there, because I want to be out there.'”

Sawa brought a lot to SSO, Cattapan said, not least his charismatic style.

She recalls when Sawa was directing the symphony during the Saskatchewan Roughriders' Grey Cup bid, and he wore a Roughriders tie — hardly traditional garb for a conductor.

“He somehow managed to tie football with this music that is being performed that night,” Cattapan said. “I think people appreciate that. I think that people like that he finds a way to make classical music accessible.”

In recognition of his years of service, Sawa will be made SSO's conductor emeritus.

“We're hopeful he'll still have a relationship with us and come back to conduct,” Cattapan said.

Sawa, who, in addition to conducting in Sudbury and his home city of Regina, also directs Saskatoon's symphony, said he's had many positive experiences in Sudbury, including boosting audience numbers.

To put it bluntly, Sawa said Sudbury's audiences were small and dying. “You may play the most perfect music in the world, but if nobody hears you, what have you done?” Sawa said.

Within a few years, subscriptions to SSO were sold out, prompting a move from Laurentian University's Fraser Auditorium — which has a little less than 700 seats — to the new Glad Tidings church, which has 1,300 seats.

SSO faces new challenges, though, as it can't afford the rent at Glad Tidings, Sawa said. A municipally built performance hall would be great for the symphony and other arts groups, he said.

With Sawa's departure, SSO has embarked on a search for a new music director, which is responsible for group's overall artistic direction.

The symphony received 90 applications from around the world, and is in the process of narrowing the field down to six.

Each of these candidates will then plan and conduct a concert for the 2015-2016 season. Symphony audiences — as well as other stakeholders such as orchestra members — will then give feedback about each candidate.

“It's really about finding the person who is the best fit for the community,” Cattapan said.

Northern Life will be following Sudbury Symphony Orchestra's search for a new music director. Watch for future articles on this subject.