Jason Noble is living proof that being a composer doesn't mean you have to have been buried in some German cemetery for the last 200 years. The Montreal-based classical music composer is alive and well, and in Sudbury.
Apr 18, 2013 7:06 PM By: Jenny Jelen 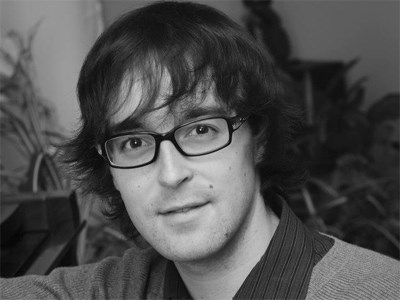 Jason Noble wrote A travers la fenetre dan le ciel — which translates to Through The Window In The Sky — specifically for the Sudbury Symphony Orchestra. The orchestra will perform the piece April 20 during its A Salute to the North! program. Supplied photo.
Jason Noble is living proof that being a composer doesn't mean you have to have been buried in some German cemetery for the last 200 years.

The Montreal-based classical music composer is alive and well, and in Sudbury. He has spent a considerable amount of time learning about the Sudbury Symphony Orchestra, in order to write a score specially for them. On April 20, the SSO will be opening their program with the piece.

Done in the French tradition, A travers la fenetre dan le ciel — which translates to Through The Window In The Sky — invites SSO performers to step out of their comfort zone musically, while not demanding more than they are capable of technically.

Since the SSO is a semi-professional symphony, Noble wanted to ensure each musician on stage would be faced with just the right amount of challenge. That being said, Through The Window In The Sky is certainly a progressive piece, designed for the high level of skill within the SSO.

“It's a delight to have that resource at your disposal,” Noble said. “It's a real blessing to have such talented musicians here.”

Capitalizing on that talent, Noble said the seven-minute piece will often sound similar, however, it can never be repeated exactly. Nobel specifically built in room for musicians to express a bit of freedom and spontaneity.

“They can focus on the musical whole, instead of being given something (technically) demanding,” Nobel said. “Each player (will) have to have their own sense of independence.”

Throughout the piece, each player will be given the opportunity to take the spotlight. Nobel said it was “a privilege” to introduce each instrument and celebrate it.

“What a palette,” he said. “(There are) so many instruments, capable of so many things.”

Even though he wrote it, he has yet to hear an orchestra perform the piece.

Digital equipment has recreated the sound, but so far, his only auditory interaction with it has been computer-generated. It sounds good there, but Noble is the first to acknowledge that it will sound much different when 50-some people bring it to life.

“We still have to trust our imagination above all else as a measure of what we're composing,” he said.

It's one of his fundamental beliefs as a composer. Another part of his job that he prides himself on is helping move music forward. Through school presentations and speaking events, Noble shared with others his desire to contribute to music, instead of simply modifying what already exists.

“Music needs to move forward,” he said. “We should add new things. (It should be) an artistic representation of what it's like to be alive today.”

Noble's piece will begin the Symphony's A Salute to the North! program, beginning at 8 p.m. Tickets cost $42 for adults, $37 for students and seniors and $23.50 for youth. For more information, visit sudburysymphony.org.