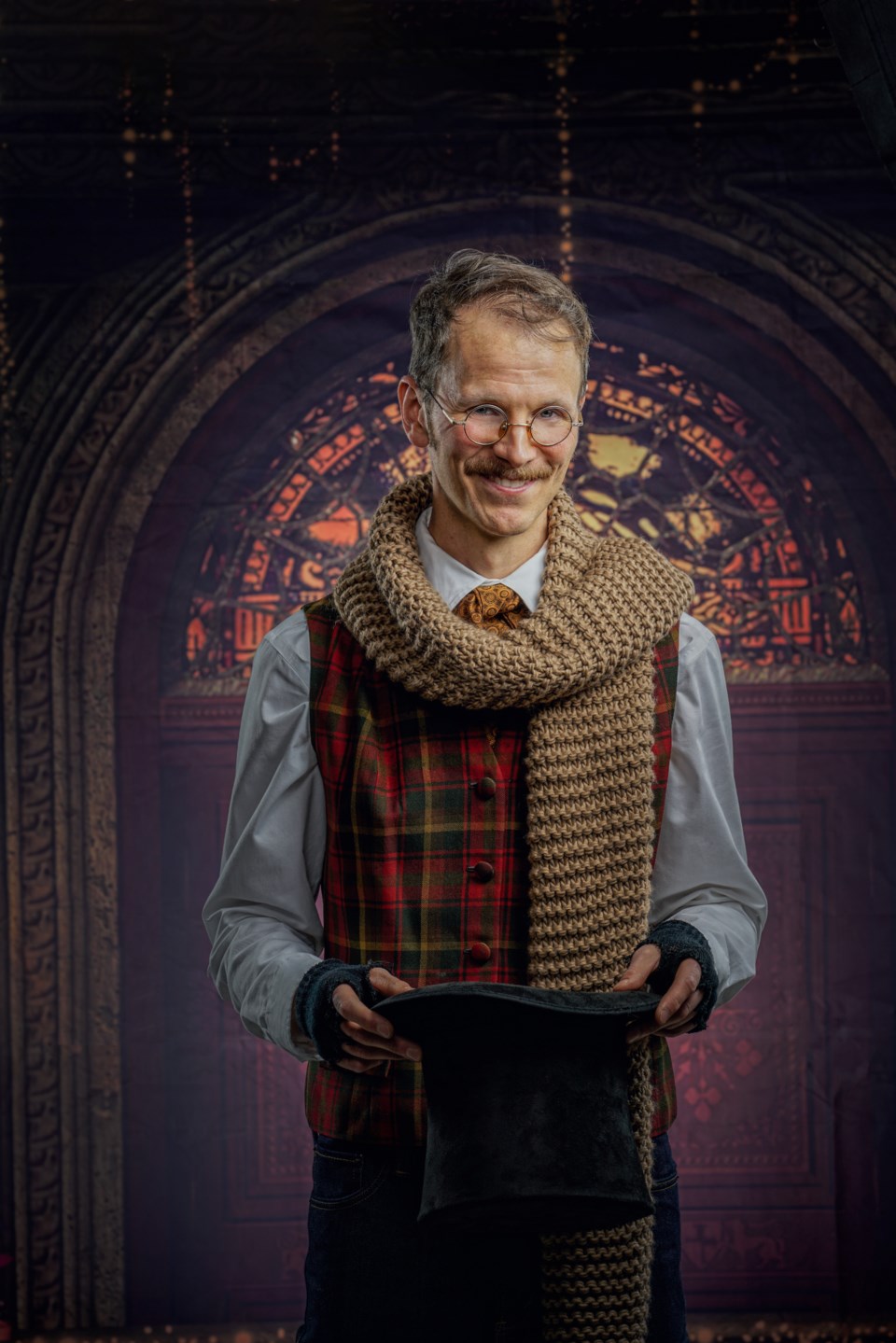 Proulx's cast of puppets range in size from two-feet to filling the stage.

Heiti is the star of this classic Christmas story and carries it almost single-handedly from beginning to end.

“It's really a whole host of characters on stage with me, local carollers, larger-than-life puppets, projections...” argues the humble Heiti, who refuses to think of it as a one-man gig.

“I was drawn to this show for many reasons,” said director John McHenry. “The  magic created by the puppets, the tremendous score played by the Nova Scotia symphony, but mostly because I knew local professional actor Matthew Heiti would be tremendous. Wait until you see him. Even I can't believe what he can do.”

“I knew Matthew was talented, but the way he can turn on a dime into the next character is incredible,” said McHenry.

Both McHenry and set/costume designer Brandon Kleiman are convinced that this version of “A Christmas Carol” is the most child friendly they've encountered.

In the first moments of the play, everyone is welcomed into the world of Dickens by the warm, friendly narrator, who seems to be talking directly to each audience member.

“Children are immediately engrossed, hooked even before the appearance of the spectres of Marley and the ghosts of Christmas past, present and future,” said McHenry and Kleiman.

“Adam Francis Proulx is outstanding as Marley and the three ghosts. I couldn't have asked for more,” said McHenry. “I guarantee the kids will love what Adam brings to the show.”

“The puppets are child friendly,” said Kleiman. “Kids are masters of using their imagination, and we've left room for that throughout this show.  Yes, there are a few scary puppet moments, but even those are not intimidating.”

The set has been carefully designed for the imagination to travel from scene to scene.

“In the centre is  a huge archway with a chain design. There's a clock and window and chair that remain as we're whisked to different locations throughout the play. Marley's warning is all about time and chains.”

It's clear why Kleiman's masterful designs are sought-after all over Canada.

“We have a few great surprises and gags in store for the audience,” said Kleiman.

One of those just might be Fezziwig's joyful costume and Heiti's embodiment of the clown within the character.

“As a director, I shouldn't have a favourite, but ...” said McHenry, as his eyes dance in describing the allure of Fezziwig.

“There has to be an element of darkness, of course. After all, this is classic Dickens.”

The production moves rapidly from moment to moment as Heiti orchestrates his tightly-paced performance.

“We never get bogged down,” said McHenry.

“The show has been adapted and produced many times, on stage and on film. My favourite film is the Alastair Sim's version. There's something about this story that never gets old. Actually, it's probably more relevant today than when it was written. Scrooge is all about himself and is unaware of the needs or feelings of anyone around him. There's a little of that going around today.”

Perhaps the Scrooge era is upon us as we dive into the world of technology at the expense of real people and relationships.

“Scrooge was way ahead of the 'I' and 'Me' movement of today. Happily, when all is said and done, Scrooge rediscovers his child within and the joy of caring about others.”

“It's a small-cast show with a big heart,” said Heiti.

Evening matinees are at 7:30 p.m. Tickets are available both at the Sudbury Theatre Centre box office and online at sudburytheatre.ca.