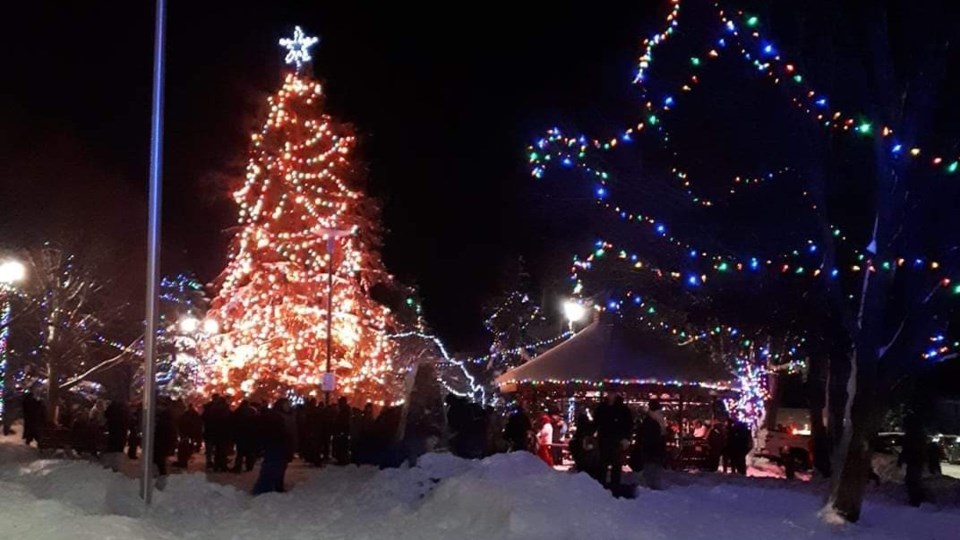 Capreol ushers in the Christmas season every year with the lighting of the tree at the local park. This year, it was almost in jeopardy when thieves stole 14 extension cords used to power the thousands of lights that will be on display. (Supplied)

It seems the Grinch has come out of hiding in Capreol.

Sometime between Nov. 25 and Nov. 29, thieves stole 14 extension cords from the community’s Christmas tree display in the park. The extension cords were connected to strands of Christmas lights, secured with tape to make sure they stayed connected during the cold, windy winter weather.

“Someone cut right through the strands of lights and took all 14 extension cords,” said Natalie Peterson, who has been co-ordinating Capreol’s Santa Claus Parade for the past six years. “Each extension cord was 25 feet long. They also took some of the lights, and ended up breaking others when they stole the extension cords.”

Volunteers Brandon Currie, Steve Jacklin and John Colosimone Jr. have been responsible for setting up the lights. They spent some 60 hours each over the past week and a half preparing for the annual Christmas tree lighting, which takes place Saturday.

“Some of it is repairable, but most of it has to be replaced outright,” Peterson said.

“I can’t see it being kids, especially since it happened at the same time as catalytic converters and extension cords being stolen from another business in the area,” she said.

Peterson also said she doesn’t think the thieves targeted the Christmas light display for any other reason than the extension cords were easily accessible in a dark area.

“I don’t think it was meant to ruin Christmas for us,” she said.

Peterson estimates between $500 and $1,000 worth of extension cords were stolen. It’s not a lot of money, and it’s more about the amount of hours that went into preparing the display.

“It’s not just putting up the lights,” she said. “They take every strand of lights home, check the light bulbs, replace the ones that aren’t working, and there’s a whole process behind it people don’t realize.”

“There’s so much pride these guys have in the display, and they’ve expanded it over the past few years to include all of the trees, the gazebo and the cenotaph.”

As much as this is a little setback, Capreol is a strong, close community and will prevail, Peterson said.

“We’ve had an outpouring of support from the Capreol community,” she said. “And there’s a bank account set up at a local bank to which people can donate money.”

The volunteers who are tackling the display are working hard to make sure everything is ready for Saturday, despite the thefts, she said.

“It’s a bit discouraging, but we’re working hard to keep the spirit of Christmas in the community, and we aren’t going to let a few grinches keep us down for long,” Peterson said.

She said she hopes that was the one and only time it happens.

“It’s going to be really disheartening if it happens again,” she said. “It was dark, the trees weren’t lit up yet, so it made it much easier to get away with it. Once it’s lit every night at 5 p.m., they will remain lit until daylight.”

Capreol’s Santa Claus parade has changed drastically this year due to COVID-19, she said.

However, residents will still get their chance to see jolly ol’ Saint Nick this Saturday through a stay-at-home-with-Santa event. Santa will make his way around the community, going past homes on every street.

The merger of the parade and the tree-lighting event has been met with a lot of success, she said.

The tree lighting and candle walk were always smaller events, and I figured if we merged it with the Santa Claus Parade, it would be successful all around, and it has become bigger and more popular every year, with people coming from all over Sudbury to watch it,” she said. “I’m really proud of the parade overall, even though we have to do things a little differently this year.”