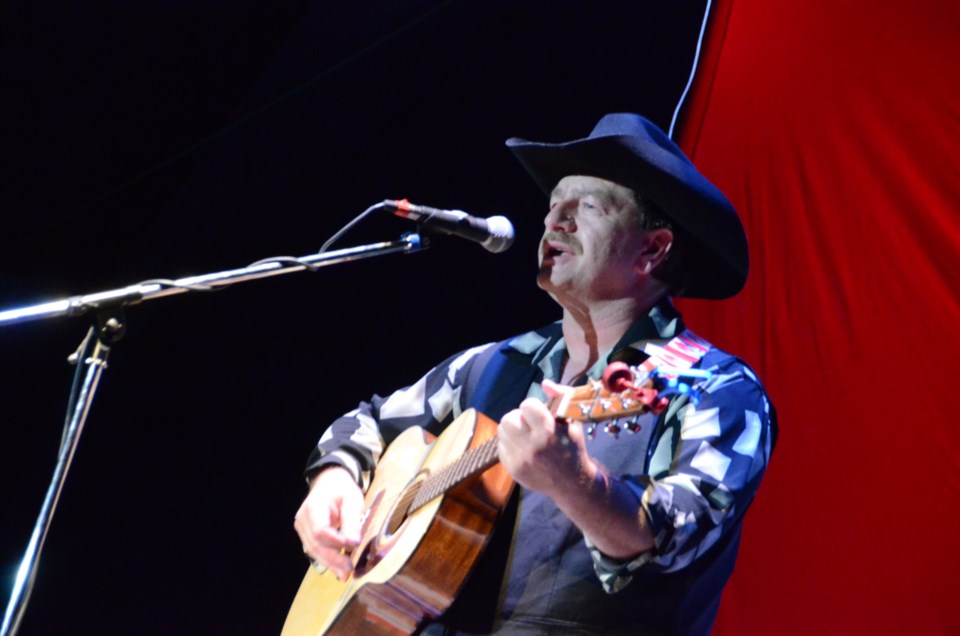 Taw Connors performs his father's songs at Theatre Cambrian during a 2017 performance in Sudbury. (Marg Seregelyi/MargsPhotography.com)

The late Stompin' Tom Connors' son, Taw Connors, is also a musician, and he's presenting a show Saturday, Sept. 21 at the Coulson Nightclub in downtown Sudbury.

Taw was last in Greater Sudbury in 2017, and did an interview with us then.

Born in Timmins, Taw didn't see much of his dad growing up, as his parents separated early on. But the father and son always kept in contact, often meeting up at shows.

He almost went on tour with Stompin' Tom the year before his father's death in 2013 at age 77. Taw was planning to become part of his support crew to get a flavour of the touring life, but his daughter became seriously ill, and he couldn't join the tour.

While he won't get to realize that dream, Taw, who now lives in Greenstone, Ont., started touring the country himself in 2016 and singing his father's famous tunes, as well as some of his own music.

Taw said he's the only one of his father's kids who inherited his vocal traits. His father's old friends often remark on the uncanny similarity.

Before deciding to tour, Taw said he looked for a sign he should do this. He found it in an encounter with a man with dementia he met while performing Stompin' Tom tunes at a long-term care home in Greenstone.

“This fella walked up to the stage at the end of the show and shook my hand, smiling from ear to ear,” he said. “I had goosebumps running up one side and down the other. He thought I was my father.

“I said to myself 'If this ain't a sign of some kind not only to bring memories to a fellow like him, but to the rest of Canadians' … This is the power that singing about your country and people has on people.”

Taw said in 2017 he loves the bronze statue of his father erected in front of the Sudbury Arena — he's visited it several times.