Students to learn about sled dogs

Students from Chelmsford Public School got an up close look at Siberian Husky sled dogs, while learning about the role they've played in Canadian history. The students learned about animal care, grooming and nutrition.
0
Jun 9, 2010 2:51 PM By: Sudbury.com Staff 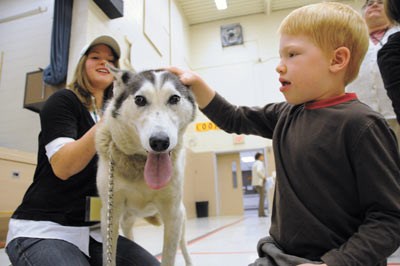 The students learned about animal care, grooming and nutrition.

According to a press release, sled dogs were the “working friends” of pioneers and Inuit, Inupiat and Yupik peoples in the Arctic. Their work has now largely been replaced by snow machines and ATVs.

She maintains a number of teams consisting of six to eight of the Siberian Husky sled dogs and offers wilderness tours in the winter months and children’s camps during the summer.

Although these dogs are quite large and very strong, they are extremely friendly and have unique characters, the press release stated.

Crawford introduced students to two of her dogs - Greenie and Kaila.

Greenie is seven years old.  She carries Anadyr bloodlines, which date back to the original Huskies of Siberia and Europe.

The press release describes the dog as “reliable, trustworthy, quiet and an honest worker.” Originally from Minnesota, Greenie has raced teams of Siberians over “challenging courses.”

Kaila is two years old. According to the press release, the dog enjoys “hugs and kisses, sitting in your lap, running, and talking.”

The press release said that over the past winter, she has “shown great potential to run in lead and has picked up on her gee-haw commands very quickly.”

Join Tommy and his mommy as they bake ornaments for Easter
Apr 7, 2020 10:00 AM
Comments
We welcome your feedback and encourage you to share your thoughts on this story. We ask that you be respectful of others and their points of view, refrain from personal attacks and stay on topic. To learn about our commenting policies and how we moderate, please read our Community Guidelines.