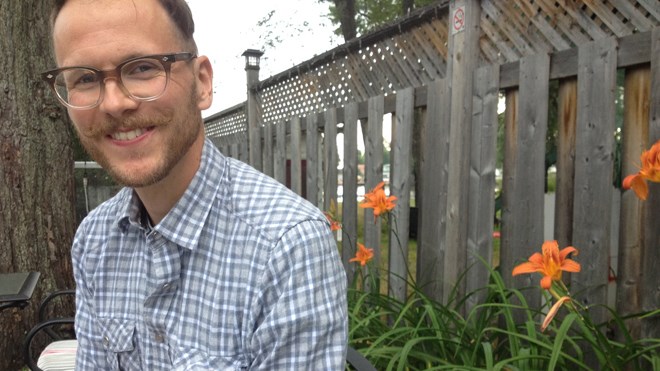 Sudburian Matthew Heiti is the winner of the Carter V. Cooper/Exile Short Fiction Competition in the emerging writer category, an honour that's accompanied by a $10,000 prize. Supplied photo.

Sudburian Matthew Heiti is the winner of the Carter V. Cooper/Exile Short Fiction Competition in the emerging writer category, an honour that's accompanied by a $10,000 prize.

Heiti, the author of the 2013 novel “The City Still Breathing,” said he habitually submits stories to competitions and publications as a way of imposing writing deadlines upon himself.

He said it's always a pleasant surprise when one of his stories is accepted or wins, as they're rejected nine out of 10 times.

“There are a bevy of other amazing writers in that short list, for both the emerging and the established categories,” Heiti said.

“So it's just an honour to be among great writers, you know? Any one of those writers could have won.”

As the winner of this competition, Heiti's story will be printed in an anthology published by Exile Editions, as well as in Exile the Literary Quarterly.

Heiti, who's also a playwright and dramaturge, hasn't exactly gone on a spending spree with the prize money — he bought a used briefcase and took his dad out to dinner.

He said the money gives him a bit of a cushion as he finishes his second novel. Heiti has also written a book of short stories that he's hoping to have published by Coach House Books, which published his first novel.

The story that won the prize is called “For they are only windmills,” named after a quotation from “Don Quixote.”

“It's a totally fictionalized account of Orson Welles and Marlon Brando and a host of other characters from the beat era trying to do a film version of Don Quixote in Tangiers,” Heiti said.

Welles famously worked on the film for about 30 years, between 1955 and his death in 1985, but it was never finished. “It's really amazing,” Heiti said. “If you see the footage, you can see the actor age.”

Heiti decided to include both Welles and Brando in his story, because they had similar career arcs in that they started out as beautiful, young leading men filled with potential, and ended up with major health problems.

“I think that's what interested me about the story in general, was just that sense of potential and failure,” he said.

It's named for her son Carter V. Cooper, who died from suicide at the age of 23. Another one of her sons is Anderson Cooper, a well-known CNN news anchor.

By the way, in a bizarre instance of symmetry, among Vanderbilt's many notable lovers was Marlon Brando.