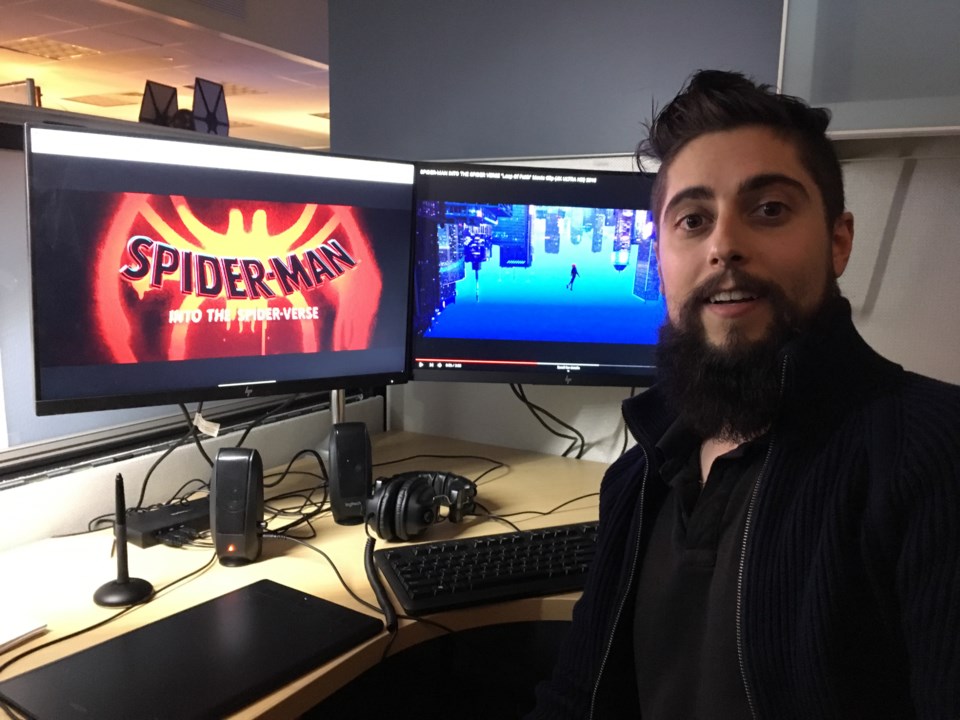 Sudbury's Scott Armstrong worked as a layout artist on Spiderman: Into the Spider-Verse, which has been nominated for Best Animated Feature at the 2019 Academy Awards. (Supplied)

The 91st Academy Awards are on Feb. 24 and the Nickel City has some representation in the form of Sudbury's Scott Armstrong.

Armstrong's body of work also includes the 2016 R-rated “Sausage Party”, which didn't get any Oscar nods, but grossed nearly $100 million in the USA, including a $34 million opening weekend at the box office.

In his role as a layout artist, Armstrong's work is done largely in pre-production, looking over storyboards in 2D and taking those drawings into the 3D world that audiences see on the screen.

"We're setting up cameras, we're developing a cinematic camera language, we're placing characters to get some posing and some choreography and we work closely with the directors to set up shots and start developing cutting patterns,” Armstrong told Rogers Radio in Sudbury in a recent interview.

“Basically it's the start of the storytelling of the film.”

Armstrong said he got into animation after doing an internship at Sudbury's March Entertainment. He then attended an animation program at Algonquin College in Ottawa. In 2013, he landed an internship at Disney, and ended up working on “Frozen.”

He has also worked on several other high-profile films, including “The Angry Birds Movie,” “Storks,” and “Smurfs: The Lost Village.”

Even though he has been involved in an Oscar-winning film in the past, Armstrong says it's "very gratifying" to get this level of recognition from the Academy.

"I worked on this project for almost two years," said Armstrong.

"I've worked on a lot of films to this point and you don't always get this kind of response even though you work your hardest on all of them and treat them all the same. But this was a project that I felt was very special from the beginning, we had an amazing team of people that just wanted to do their very best...every single shot of the film would be as crafted as possible and as exciting and fun and fresh as could be, so it's really gratifying to see this response from the Academy and from the other award associations."

For Armstrong, the chance to work on an animated superhero film brought about a sense of nostalgia, as he grew up watching Spiderman and Batman cartoons, and has always been a big fan of animation.

"I wasn't much of a comic book person but I was an animation person," said Armstrong. "In a sense it's almost like playing with action figures again and coming up with little stories and moving these characters and coming up with ideas, so it is very nostalgic for me in a lot of ways."

The layout artist had some words of encouragement for young Sudburians who may be looking to follow a similar career path and get into the film industry.

"I would say definitely just keep drawing, and if you're interested in filmmaking, there are so many tools available to us now," said Armstrong.