Sudbury Pride is holding a virtual festival next month called ‘Queerantine’
Jun 25, 2020 9:00 AM By: Heidi Ulrichsen 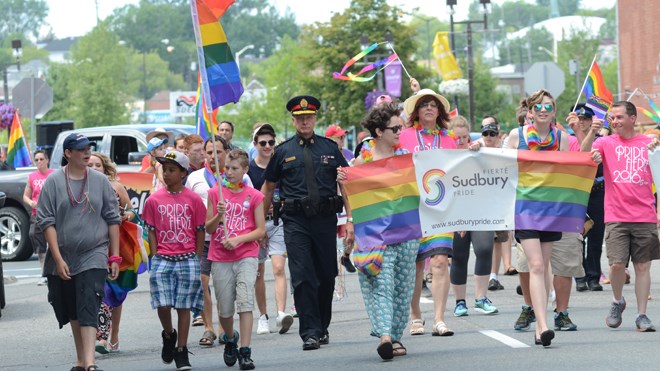 The Sudbury Pride Parade won’t be taking place next month due to the pandemic. It may be rescheduled for the fall. (File)

The month of June is Pride Month. It’s a time for LGBTQ+ people across the globe to celebrate their contributions, as well as an opportunity to raise political awareness of current issues facing their community.

Just as it has affected so many other aspects of life, the COVID-19 pandemic has changed the way Pride Month is being marked.

The Toronto Pride Parade, attended by many people from the Greater Sudbury area, has been cancelled due to the pandemic. Organizers are holding a number of virtual events instead.

Sudbury Pride has also cancelled in-person activities for its July 13-19 Pride Week, including its pride parade (local pride events are held in July instead of June so as not to compete with Toronto Pride).

Sudbury Pride is instead holding a virtual event organizers have dubbed “Queerantine.”

Alex Tétreault, chair of Sudbury Pride, said with Pride Month events scaled back, and the local gay bar, Zig’s, also shuttered due to the pandemic, local LGBTQ+ people have been left without without a way to meet.

“It’s a lot more difficult to keep in touch with their support systems, with their circles,” he said.

“There’s plenty of people who had to move back home. The family situation may not be the most supportive.

“So really I think what the pandemic has done mostly is highlight the need for community for things like Pride Month and Pride Week.

“We’re kind of stuck in the situation where we have to imagine a Pride Week where we can still have a sense of connection amongst each other, without actually being physically able to be there together.”

Queerantine is essentially the regular Pride Festival, but transformed into a digital format, he said.

“We’re still working on the details of exactly which events we’re going to be able to do,” Tétreault said. “Obviously there’s something like the Pride March, which won’t be able to happen.”

There is some possibility that the local pride parade could be rescheduled for this fall.

Some events such as talks will be presented via a platform such as Zoom, and Sudburians will be encouraged to decorate their homes Pride-style.

“We’re encouraging folks to decorate their houses, their apartments, their front yards, windows —essentially turn their space into a parade float for the duration of Pride Week,” Tétreault said.

“Folks who are outside, who go for walks, can still see that there’s a supportive community there. It’s not the same as thousands of people marching through the streets together, but it’s a way we can still recreate a sense of community.”

One highlight of Sudbury Pride is the youth pride prom. Because that event is also cancelled due to the pandemic, Tétreault said organizers are putting something special together for local LGBT youth.

“Queer youth 18 and under who would normally be able to attend the pride prom are encouraged to sign up on our website,” he said.

“You put in your name, address, and then the week before pride week, we would be hand-delivering little care packages with flags, buttons, pins, little snacks and treats.

“It’s something to at least still show the youth that we care about them. They’re the future. We want them to feel safe and to be able to celebrate in their own way.”