Rob Murphy’s song list reads like a Toronto phone book, all the way from AC/DC to Zeppelin. Of course, it’s just as diverse as a big city directory.
Sep 20, 2011 2:19 PM By: Jenny Jelen 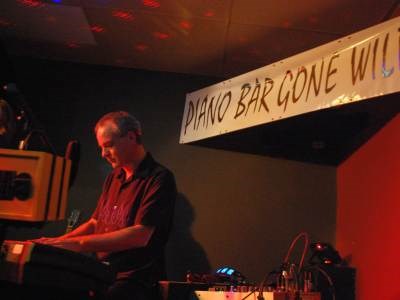 Rob Murphy performed the first Piano Bar Gone Wild show at the Algoma Tavern in Chelmsford Sept. 8. He plans to take his show to various venues in the city in the coming months. Photo by Jenny Jelen.

Rob Murphy’s song list reads like a Toronto phone book, all the way from AC/DC to Zeppelin. Of course, it’s just as diverse as a big city directory.

From his piano bench, he can sing rocking heavy metal tracks to heartfelt ballads, and everything in between.

Since the age of three, he’s been honing his skills. He’s spent nearly half his life in bands, touring in all four compass directions.

When he became a family man about 20 years ago, he decided to stay closer to home.

Murphy had the crowd on their feet when he played the Algoma Tavern, just two blocks from where he lives in Chelmsford.

The concert was the first of his Piano Bar Gone Wild series. Murphy said he plans to bring his show to various venues across the city in the coming months.

“This piano bar thing is a lot of fun,” he said. “All the rage right now.” Murphy said piano bars include “only piano and voice.”

“Piano bars aren’t supposed to use any do-dads that don’t have a live musician playing them,” he explained.

With music playing at a comfortable volume in the room, Murphy said people are invited to chat at their tables while he plays, and requests are always welcomed.

Whether crowds are enjoying conversation, a meal, drinks or just taking in the show, Murphy said there’s nothing quite like a lone piano on stage. “There is a real allure to someone playing a piano well,” he said. “There’s something that stands the piano and voice (apart) from every other instrument. The piano was (once) the ultimate symbol of success.”

When the life-long musician isn’t learning new songs or performing them, he’s teaching others the keys to success in music as an Associate of The Royal Conservatory of Music. He also takes time to produce songs for radio and TV jingles — or anything that involves music, really. “It’s been part of my life, all my life,” he said.

It’s also something he wants to get better at.

“I research anything I can (about music),” he said. “I’m addicted to learning new songs.”

For more information about Murphy, or his upcoming shows, visit www.robmurphy.yolasite.com.