Superstar musician lives quietly among us 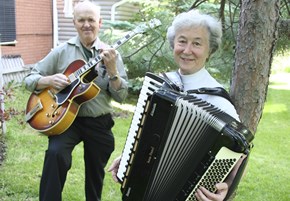 Iona Reed Pukara and Ron Kelly are special guests later this month at the International Accordion Convention in Las Vegas.

If Iona Reed Pukara was an opera or a rock star, it wouldn't be hard to imagine her glamorous life. But it's harder to imagine the life of an accordion superstar - especially one who is so down-to-earth and whose home is considered a bit of a backwoods.

But her life is busy, exciting, and at times, fascinating. Pukara has performed for audiences throughout the world including Hollywood movie stars. And later this month, she and her partner, guitarist Ron Kelly, are special guests at the International Accordion Convention in Las Vegas.

Pukara is the honorary conductor at the event, which will be attended by top accordion players as well as those who just love the music. Pukara and Kelly will perform and teach a master class.

Pukara says she doesn't know what to expect in Las Vegas, where she will attract a fair bit of attention and renew acquaintances. She's a little bit nervous.&#160; According to the convention program, her appearance is a big deal.

Pukara and Kelly will share the spotlight with musicians such as Don Lipovac, who appeared on the Lawrence Welk Show, and Bernadette Conlon, one of Australia's top accordionists.

Pukara started playing the accordion when she was a child. In 1962 she won the world championship in Prague.

For many years she performed with her late husband Karl Pukara. The couple toured when they weren't giving music lessons to literally thousands of Sudbury-area students. She has been teaching accordion and piano for 50 years.

In 1997, the Pukaras played at the pre-Oscar party in Los Angeles. The party was arranged by a former student who has made it big in Hollywood as a special events co-orindator. The couple got to attend the awards ceremony and mingle with the glitterati.

When Karl died, Pukara became the leader for the Karl Pukara Trio. The current members of the trio are Pukara, Kelly and drummer Bill Tuttle.

Pukara also has performed with Sudbury's Pandora Topp's tribute to Edith Piaf at the National Arts Centre in Ottawa and at the Francophone World Summit in Moncton, N.B.&#160; She has lent her considerable music talent as a pianist and accordionist to many local musical groups and Theatre Cambrian.

There is renewed interest in the accordion. For many years, it took a backseat to the electric guitar as the instrument of choice of young people learning to play music.

But many baby boomers took lessons in the 1950 and 1960s. Now that they are older, they are digging out their instruments and beginning rediscover their affection for playing again, says Pukara.

Sudbury audiences can hear the Pukara Trio Sunday, July 9 at the Copper Cliff Legion. They will also play at the Bell Park gazebo Sunday, Aug. 13. For people who like to plan ahead, the trio will play at the Polish Combatants Hall this New Year's Eve.