Supertitles is super news for multilingual families — that means something to look forward to for half the francophone families in northeastern Ontario.
Feb 16, 2012 6:20 PM By: Jenny Jelen 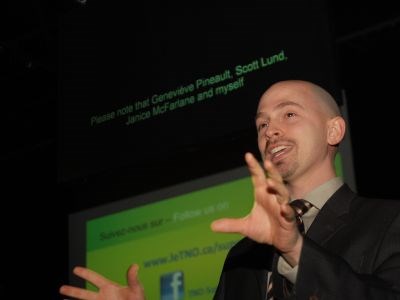 This season, Le Théâtre du Nouvel-Ontario will present two francophone plays with “supertitles,” or a running commentary of what the actors are saying, in English text on a screen playing over the set, as seen in this photo. Photo by Jenny Jelen.

Supertitles is super news for multilingual families — that means something to look forward to for half the francophone families in northeastern Ontario.

This season, Le Théâtre du Nouvel-Ontario will present two francophone plays with “supertitles,” or a running commentary of what the actors are saying, in English text on a screen playing over the set.

“We undertook this initiative for several reasons,” Geneviève Pineault, TNO's artistic director, said. “At the outset, many of our current spectators indicated that they would like to share the TNO experience with loved ones and friends who are not fully bilingual. Secondly, we present high-quality French-language theatre that deserves to be seen by more people.”

Supertitles have been successfully used in opera, and are gaining momentum in the theatre industry.

Pineault said she has been to productions that use them, and has never been let down. What makes the initiative that much more appealing is that the supertitles are manually adjusted — that means if an actor misses a line, the supertitles will reflect that.

“Theatre is live,” Pineault said. “Anything can happen.”

Each show will be presented with the up-to-date text in a different position, strategically placed so anglophone audience members can see the words, as well as the actors in their peripherals.

“What's great with theatre is the contact with live people,” Pineault said.
It lets every audience member understand what's going on, and catch the actual show, which is what makes theatre, she explained.

The productions with which TNO has opted to use Supertitles are La liste (The List) and II (deux) (Two Rooms).

Both fit into the new original genre for which TNO is noted.

Since coming into its 40th year of theatre production, TNO has been attracting nearly full-houses at every show. In order to accommodate the influx of new patrons, Pineault said more show dates will likely be added.

Supertitles can be seen at the March 10 production of La liste at 2 p.m., and the April 14 matinée of II, as well as the April 19 evening show.

Those interested in attending both productions can save 10 per cent off ticket price.