When Jamie Arrowsmith steps out onto the stage to conduct the Sudbury Symphony Orchestra Feb. 22, he'll be doing something that's new to him, but still familiar.
Feb 13, 2014 6:51 PM By: Heidi Ulrichsen 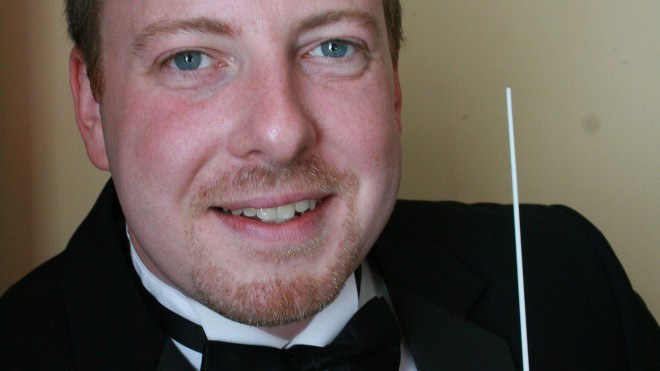 When Jamie Arrowsmith steps out onto the stage to conduct the Sudbury Symphony Orchestra Feb. 22, he'll be doing something that's new to him, but still familiar.

Arrowsmith is in his third season as the symphony's rehearsal conductor, leading the orchestra at its regular Tuesday evening rehearsals.

When it comes time for a performance, however, he hands over the baton to Sudbury Symphony Orchestra conductor Victor Sawa.

But Sawa can't make it to the symphony's upcoming performance, and Arrowsmith — also the music director of the Sudbury Youth Orchestra and the co-ordinator of Cambrian College's music program — has been asked to take over.

He said he's really excited for the opportunity. Arrowsmith said it's different conducting a group during a performance as opposed to at a rehearsal, as adrenaline levels are higher.

“I'm just happy for the opportunity to do it,” he said.

Arrowsmith, who grew up in Sudbury, has a long history with Sudbury Symphony Orchestra, first playing viola with the group in his early teens.

After graduating from Lasalle Secondary School — whose music program he said was also crucial to his musical development — he went on to acquire degrees from the Eastman School of Music and Kent State University.

He is currently a PhD candidate at Brunel University in London, England.

Arrowsmith, who has studied conducting throughout his years of schooling, likens the practice to being the coach of a sports team.

“I'm really just trying to get the team to play really, really well together,” he said.

He said he's there to challenge the musicians to learn their parts well and to become better musicians.

“It's actually extremely rewarding, especially when things work out,” Arrowsmith said. “When problems are solved, when music comes together, it's great fun.”

Beyond the fact that it'll be his first time conducting Sudbury Symphony Orchestra in concert Feb. 22, Arrowsmith said he's also looking to the group's upcoming performance for another reason.

The concert, dubbed SSO Magical, features the symphony playing with the Juno Award-nominated group Sultans of String, whose upbeat style ranges from big band to Spanish to middle eastern.

“It's going to be great fun,” Arrowsmith said. “We're all looking forward to the challenge, and to the reward of being able to play great music for our friends and colleagues in the city.”