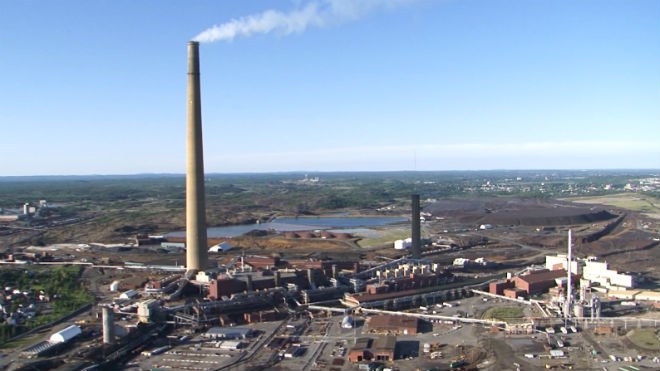 The book is set in 1963, during a particularly violent time in Sudbury's history — the Steelworkers' raids on the then-powerful Mine Mill union.

Later this month, Lowe will publish The Insatiable Maw, the second in The Nickel Range Trilogy series, which focuses on Sudbury's mining history. The book features original illustrations and cover art by Sudbury's Oryst Sawchuk.

It's now 1968, and McCool has recovered from an injury sustained underground, and has been reassigned to work at the Copper Cliff Smelter.

“It's a horrible, filthy, gassy, unsafe place to work, and it's polluting the whole area with sulphur dioxide,” Lowe said.

McCool and his girlfriend Jo Ann Winter, live in a co-op run by freelance reporter Foley Gilpin, who uncovers a high-level collusion between Inco and the provincial government involving inspections of the smelter.

The book ends with the construction of the Inco Superstack, completed in 1972. The structure made a huge difference to Sudburians' quality of life, Lowe said.

“The plan was ... it would waft the sulphur dioxide way up into the stratosphere so it would go up in the jet stream and go somewhere,” he said. “No one knew where, but far away from here at least. Not our problem anymore. Problem solved.”

Lowe said he's currently working on the third novel in the trilogy, set in 1978, during the Steelworkers' long, bitter strike against Inco.

While he's published the first two novels a year apart, he said he thinks it's going to take a little more time for the third, as it's a longer novel.

“It's Sudbury's own history, and it's a fascinating history, it really is,” Lowe said. “It's something everyone should know more about, not just people in Sudbury, but I think people all around the world.

“This is my great hope. You don't think about making movies when you're writing a book, but this time, I kind of did. I really hope this one does become a movie.”

Lowe, 68, has penned four other books besides his current series, flipping between fiction and non-fiction.

A former Northern Life managing editor and columnist who now lives at Pioneer Manor, he's been able to continue writing despite a 2008 stroke that paralysed the left side of his body.

Lowe invites everyone out to the launch party for The Insatiable Maw, at 2 p.m. May 24 at the Steelworkers Hall.

The book, published by Baraka Books, retails for $20, and will be available for purchase after May 24 at Chapters.

Events happening in Sudbury this week
Oct 29, 2020 1:00 PM
Comments
We welcome your feedback and encourage you to share your thoughts. We ask that you be respectful of others and their points of view, refrain from personal attacks and stay on topic. To learn about our commenting policies and how we moderate, please read our Community Guidelines.