The making of Metal Feast 6

Mark Howitt knows metal music isn't for everyone. But there will be something for everyone who likes it, no matter what sub-genre they most prefer, at this year's Metal Feast.
0
Mar 7, 2011 4:38 PM By: Jenny Jelen 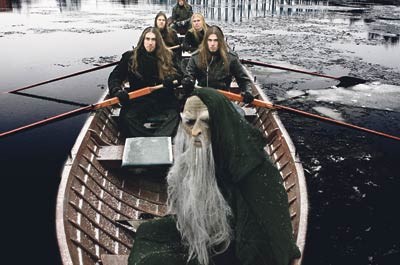 Kalmah, a thrash-metal band from Finland, will headline the Metal Feast 6 show on March 12. Supplied photo

Mark Howitt knows metal music isn't for everyone. But there will be something for everyone who likes it, no matter what sub-genre they most prefer, at this year's Metal Feast.

Sixteen groups are scheduled to perform at Metal Feast 6, and Howitt said audiences can expect to hear all kinds of metal.

As the owner and manager of Archaic North Entertainment and the vocalist for Wolven Ancestry, hosting Metal Feasts is part of what Howitt does to continue bringing quality metal shows to Greater Sudbury.

“Sudbury's metal scene is very together and solid,” he said. “It's good to see a community like that in Sudbury.”

On the first night of the two-day festival, one of Canada’s oldest metal bands — Necronomicon — will play.

We’ve got some new material we’re itching to try out live.

Chris Finlay,
Beyond Within guitarist

Headlining the second night is Kalmah, a thrash-metal band from Finland. Howitt said after the band headlined Metal Feast 4, “a lot of people asked me to get them back.”

The lineup includes a number of other groups, some from Greater Sudbury and some from other parts of the province.

Beyond Within is one of the local bands taking the stage. The group has been together for about nine years, but lineup changes have kept them from performing as often as they'd like. They are now ready for their third Metal Feast performance though.

“We've got some new material we're itching to try out live,” Chris Finlay, the band's guitarist, stated in an e-mail to Northern Life. “We're looking to step back into things after a long spell of downtime.”

Finlay said Metal Feast's are always an enjoyable experience for the group, as well as other performers and metal fans.

“I like playing it because it gives us a chance to share the stage with some of our favourite bands, as well as have a lot of fun watching the other bands.”

Howitt said some of the other Metal Feast 6 performers, like Empyrean Plague and Strings of Ares, are signed to his label, Archaic North. Having these groups play for 200 to 300 “metalheads” from Greater Sudbury and beyond is a great way to showcase their talent, he said.

While the focus of the festival is metal, Howitt said there are some other events lined up, like a poutine eating contest.

The contest is a tribute to one of his other projects, 85 Pound Poutine. Howitt said the “bluegrass, comedy and death metal” band makes up their music as they play.

“It's a humorous band that pokes fun at Canadian history and politics,” Howitt said with a laugh. “It's gets pretty messy.”

The all-ages festival will include a licenced bar away from the main stage area.

For more information about the Metal Feast 6, visit www.sudmetal.ca or www.archaicnorth.com.

The lineup for Metal Feast 6

Sudbury families are painting their windows in solidarity — send us your pics!
Apr 1, 2020 2:45 PM

Hey Sudbury shutterbugs, we still want your photos for our In Focus feature
Apr 1, 2020 1:30 PM

Tommy and his mommy, Day 13 - growing grass heads for the garden
Apr 1, 2020 10:01 AM
Comments
We welcome your feedback and encourage you to share your thoughts on this story. We ask that you be respectful of others and their points of view, refrain from personal attacks and stay on topic. To learn about our commenting policies and how we moderate, please read our Community Guidelines.