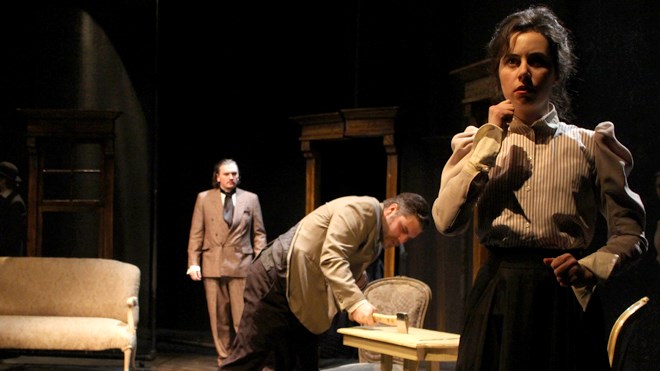 Perhaps one of the most famous and talked about murders in American folk history, "Blood Relations" tells the story of Lizzie Borden, who was acquitted of the brutal 1892 axe murder of her mother and father.

The story is one of the most speculated in the history of American criminal law and playwright Sharon Pollock's tale tells the inside story of what really happened ... maybe.

The timing for the play could not be more serendipitous, coming off the heels of the much-watched and oft-debated Netflix series “Making a Murderer” and in the midst of FX's recounting of the O.J. Simpson trial in “American Crime Story: The People vs O.J. Simpson”.

“It's probably always going to be true that people are always going to be interested in murder,” said director Adam Bergquist. “There's been a lot of comparisons with (Blood Relations and) the O.J. (Simpson) case in him being a rich man and that maybe he got away with murder, it was a sensational trial and it's the same with Lizzie Borden — she had a sensational trial and was from a rich family, and maybe she got away with murder.”

Blood Relations examines the life of Lizzie Borden 10 years after her acquittal, and features a cast and crew from Thorneloe Theatre Arts and Cambrian College Theatre Arts programs.

The cast is quite large at 10 people, with students ranging from first year to seniors at Thorneloe. This play offers the audience a theatre experience that you would be hard-pressed to find elsewhere in Sudbury.

“What's great about doing it here is that we have a large cast, and we have the people,” said Bergquist. “It's really hard to find 10 actors willing and able to do a show like this or to have the money to pay them all, so doing a show like this gives (the students) a chance to experience big theatre. Even STC would have a hard time doing this show because of the personnel involved.”

Not unlike other high-profile cases that have made their way into water cooler conversations, the ambiguity of "Blood Relations" and its propensity to spark debate is sure to have theatre-goers talking about the play for days after seeing it.

“What you have here is something kind of meta-theatrical and there's a play within the play, and the question that it asks is, 'what is the story that you choose to believe? Is it true or is it just that you would rather believe the story,'” said Bergquist.

“We present you with all the facts and let you decide; criminal justice was a little different at that time and maybe if this was held today she (Lizzie) would not escape conviction. Most of the evidence against her was circumstantial and there was very little, if any hard proof that she committed these murders.”

Blood Relations opens March 3 at 7:30 p.m. at the Ernie Checkeris Theatre. Tickets are $10 for students, $20 for general admission are available for purchase at the door.

Check out the production's event page for more performance dates and ticket information.