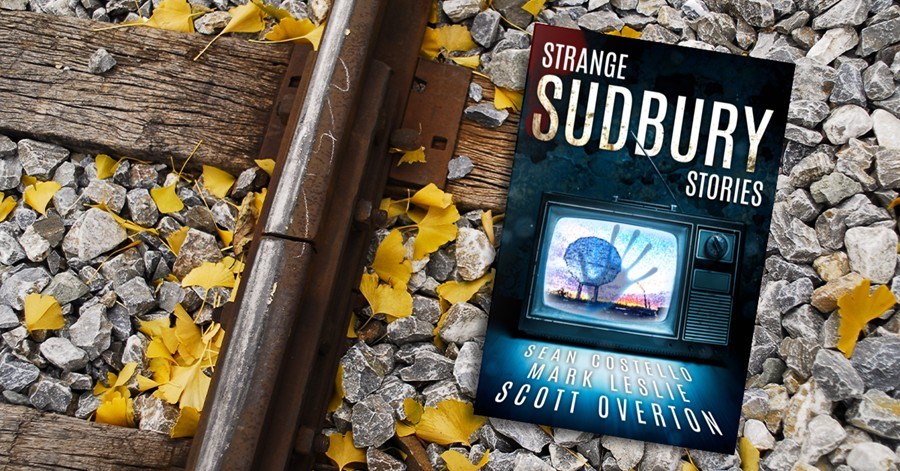 Three authors who call Sudbury home have collaborated to release a collection of eerie stories perfect for Halloween reading.

The stories, which would all fit well into episodes of The Twilight Zone, The Outer Limits or Black Mirror all draw upon the strange, the supernatural, and the speculative.

They involve boogie-men and ghosts, or at least the belief that there are more things in heaven and earth than are dreamt of in our philosophies, technology, wonder, and the willingness to explore those dark corners that make us ponder “what if?” and check under the bed.

Sean Costello was born in Ottawa and later moved to Sudbury, where he spent most of his life working as an anesthesiologist prior to his retirement a few years ago. His first novel, Eden’s Eyes, which was released from Pocket Books in 1989, was set in Sudbury.

In the same way that Stephen King brought horror to New England, Costello brought terror right into the nickel capital of the world. His other novels, a combination of thrillers and horror, and include Finders Keepers, Squall, Last Call, and Sandman, have sold tens of thousands of copies in more than 120 countries worldwide.

Costello’s supernatural thriller Here After, which is a story of love, loss, obsession, and redemption, has been optioned for film by David Hackl, director of Saw V. Costello has nine novels out and is hard at work on others.

Scott Overton was born in London, Ont., raised near Toronto, and then the radio business took him to Lindsay, North Bay, Timmins, and finally Sudbury, where he and his family have lived for more than 30 years.

Twenty-six of those years Overton worked as a radio personality for CIGM and Rewind 103.9 before he retired to commit himself to full-time writing. His first novel Dead Air, originally published by Sudbury publisher Scrivener Press, not only brought the north to literary thriller readers, but it shared insights into the world of a radio DJ personality, as a morning show radio host deals with declining ratings, a wrecked marriage, a death threat, and vicious assaults on his life.

His most recent novel, The Primus Labyrinth, is more science fiction in premise and might be seen as a cross between the movies Fantastic Voyage and a Michael Crichton thriller.

Mark Leslie was born in Levack, and currently resides in Waterloo, Ont., but he has never stopped calling Sudbury his home. His first book, One Hand Screaming, a collection of horror stories, was launched in 2004 at the Sudbury Chapters.

His co-authored Spooky Sudbury, also launched in Sudbury at the Chapters, Coles, and Costco in 2013, remains the bestselling of all of his “true ghost story” books from Dundurn, which include Haunted Hospitals, Creepy Capital, and Macabre Montreal.

His 2014 horror novel I, Death about a teenager trying to live with a death curse hanging over him, is also set in Sudbury and Levack.

“Levack, and Sudbury continue to be home on my internal, moral, and emotional compass,” Mark Leslie said. “No matter where in the world I have traveled or lived, Sudbury will always be home to me.”

Leslie, whose full name is Mark Leslie Lefebvre – he drops the difficult to spell name in his writing – who grew up in Levack, says that he returns home at least a half dozen times a year to visit his mother, Jean, who still lives in his childhood home.

“My dearest friends, people who will continue to be in my life, to inspire and move me, are from Sudbury,” he said.

“Some have been with me from the time I was five, twelve, and fourteen years old. The longest relationships I have ever had, and among the ones I cherish the most are all dear friends from my earliest days of growing up and going to school in Levack.

“Others I have had the good fortune to connect with later in life because we shared that common bond of ‘you’re from Sudbury too?’ that can instantly connect us with one another no matter where in the world we go.”

Though all three authors have worked together before, Leslie was the editor of the Canadian science fiction, fantasy, and horror anthology Tesseracts Sixteen: Parnassus Unbound, which included stories by Costello and Overton, Leslie co-publishes Costello’s book under the Red Tower Publication imprint, and Overton , who is also a professional voice talent, is the narrator for Leslie’s A Canadian Werewolf in New York and the other books in the Canadian Werewolf series.

The book is available in eBook and print via multiple online retailers. The book can be special ordered from your favorite bookstore. You can also request it at your branch of the Sudbury Public Library.