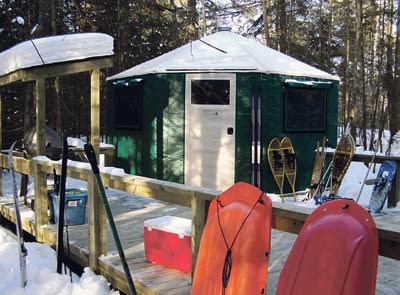 There are six yurts — insulated tents with electricity — at Killarney Provincial Park. The park rents them out to campers during the winter. Supplied photo
Ontario’s parks attract thousands of visitors each year. In 2010, nearly 100,000 more people camped out in one of the province’s 329 parks than they did the year before. According to the Ministry of Natural Resources, Ontario parks received 9,534,362 visits this year.

Bewick attributed the increase in park visitors to the warm weather the province experienced over the summer.

When Heather Lewis visits Chutes Provincial Park, east of Espanola, she makes a weekend out of it. Camping at the park started as a tradition between her and her sister Christine Lavallée, and has now grown to include Lavallée’s four-year-old daughter, Danielle.

While they enjoy experiencing the great outdoors, Lewis said it’s nice to be so close to amenities, especially when travelling with a young camper.

“The location is really good,” she said. “It’s only an hour drive (from Sudbury).”

While the peak camping season is over for the year, there are still a number of provincial parks open during the winter.

“In the winter, skiing, skating, tobogganing and bird watching are perfect ways to have some family fun in parks while enjoying beautiful snowy landscapes,” Linda Jeffrey, minister of natural resources, stated.

Killarney Provincial Park is one of the parks in the Greater Sudbury area that stays open all year long.

Cam Hoepp, assistant park superintendent at Killarney, said, in ideal conditions, about 33 kilometres of trails are kept clear for winter activities, like snowshoeing and cross-country skiing.

Most of the day-traffic passing through the park in the winter comes from Sudbury skiers looking to take advantage of the scenic trails, he said. There are a number of adventurous campers who set up shop at the park overnight, too.
Hoepp said most weekends, all six “yurts,” or insulated tents equipped with electricity, are booked.

Over the Christmas holidays, Danielle and Bill Gardner spent a week at the park with their three-year-old daughter Maryn. The family, who lives in Ingersoll, Ont., have been travelling to Killarney for the past decade.

“Killarney is the most beautiful place I’ve ever seen,” Danielle, an artist, said. “It’s peaceful, it’s beautiful and it’s quiet.”

Most of her paintings have been inspired by the area. Danielle has even shared her painting expertise with other guests at the park. During their last visit, she taught a group of men the basics of watercolour painting. They also had time for more traditional camping activities. Bill said thy cross-country skied more than 30 kilometres of trails, and had the chance to see some wildlife.

Danielle said their stay in one of the park’s yurts was very comfortable and clean.

As milder winter weather begins to set in toward February and March, Hoepp said some people even sleep outside.

“In ideal snow conditions, some people dig quincees,” he said. “They sleep in that, or they bring tents.”

Most people who opt to camp out in the snow bring traditional tents, and simply dress for the weather. “It’s a matter of layering and dressing properly,” Hoepp said.