They’ve packed their survival kits. They’ve been conditioning in full apparel. They’ve watched all the episodes, so they know what to expect. They don’t want to sound cocky, but they’re “going to annihilate him.” On Oct.
0
Oct 13, 2010 10:25 PM By: Jenny Jelen 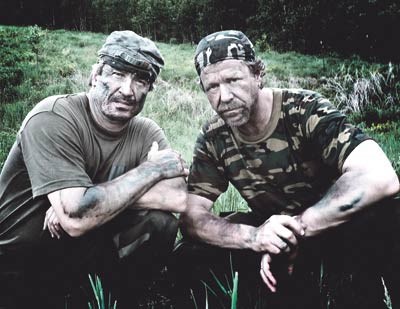 Mike Lindroos and Rob Provencher are “off to beat Mantracker.” The two will be filming an episode for the Outdoor Life Network series on Oct. 20, somewhere in the United States. They will find out where they are going two days before they leave. Supplied photo

They’ve packed their survival kits. They’ve been conditioning in full apparel. They’ve watched all the episodes, so they know what to expect.

They don’t want to sound cocky, but they’re “going to annihilate him.”

On Oct. 20, Rob Provencher and Mike Lindroos are headed to an unknown location in the United States. They have to travel 40 kilometres in 36 hours, and they can’t get caught by Mantracker in the process.

The two Sudburians have only been friends for about a year, but said their complementary attitudes and ideas could lead them to success.

Lindroos said Provencher is “like a bull in a china shop,” while Provencher said Lindroos has a tendency to be a bit more conservative.

Together, they plan to outsmart and outrun Terry Grant, a professional tracker with more than 25 years of experience and the host of the Outdoor Life Network show, Mantracker.

The two met through their wives. After Provencher and Lindroos agreed that they both loved the show, Lindroos’ wife, Laurie Hayes, helped put the wheels in motion.

At the beginning of July, Provencher and Lindroos filmed an application video, explaining why they should be selected to appear on the show.

After posting it on YouTube, the producer of Mantracker contacted the two Sudburians and invited them to be be “prey.” They couldn’t make the original date, but agreed to fly out later this month.

The duo will have a compass, a map and a head start to beat Mantracker to the finish line. However, Grant has the advantage of a local guide who is familiar with the area, and he’ll be travelling by horseback.

We’re going to play smart. It’s all about pacing.

Provencher’s daughter rides horses, so he’s been able to learn more about them from her. He also has some experience dodging those who are after him.

The 52-year-old said when he was younger, he ran from authorities on more than one occasion, so he’s familiar with keeping his composure under pressure.

Lindroos, who is more “strait-laced,” said he plans to keep Provencher focused and on track.

The two have been picking up supplies and goods for the trip, and have been planning strategies too. Provencher and Lindroos plan on packing multiple pairs of shoes, so Mantracker has trouble following their footsteps. They have more tricks up their sleeves to keep him off their heels, but they said they didn’t want to give away all their secrets.

The episode Provencher and Lindroos are part of won’t air until next year. Until then, they have to keep quiet about the results.

When the episode finally does air on the Outdoor Life Network, the men are planning to have a benefit evening to go with the screening. They want to raise funds for Operation Smile, an organization that helps fund the cost of reconstructive facial surgeries for children with deformities.

For more information about the charity, visit www.socsmile.org.

To check out Provencher and Lindroos’ application video, visit www.westmountphotography.com/mantracker/mantracker.html.

Sudbury Writers' Guild launches collaborative Hospital Mural Project
Feb 26, 2020 8:00 PM
Comments
We welcome your feedback and encourage you to share your thoughts on this story. We ask that you be respectful of others and their points of view, refrain from personal attacks and stay on topic. To learn about our commenting policies and how we moderate, please read our Community Guidelines.