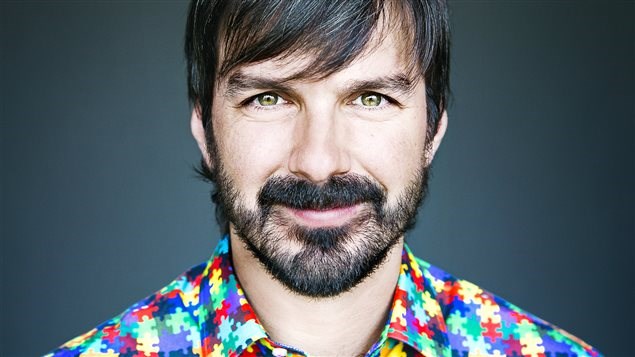 With help from the kids, Robitaille, who's the headliner at Le French Fest tonight, wrote a short song about Sudbury featuring cliches about the Nickel City such as the Superstack and the Big Nickel.

“It's something I've been doing this year,” Robitaille said. “For every town I go play I try to make a little song for them.”

Robitaille comes from the village of Lafontaine, on Georgian Bay. In case you're trying to place it, that's near the slightly larger communities of Penetanguishine and Midland.

Just like Sudbury, this area has a large Francophone population.

Lafontaine, he said, has a strong musical heritage. His grandfather played violin and his dad was well-known in the community as a singer, emcee and jokester.

Although Robitaille began his musical career at 15 by writing Beatles-inspired inspired songs in English, he now writes and performs in French, and finds much of his audience in Quebec.

The award-winning musician was given a boost early in his career by winning Francophone music contests such as Ontario Pop and Granby International Song Festival.

Sudbury Francophone musician and actor Stef Paquette was one of the jury members on Ontario Pop, something Paquette usually reminds him of, Robitaille said.

“As most kids, I wanted a career in English,” said Robitaille, whose mother is Anglophone and father is Francophone.

“It worked. People liked it, and I just kept doing it. And there's some pride too I guess. I just discovered I was proud of my French heritage as a teenager.

“I started to lose my French, and then I realized I don't want to be the last one of the Robitailles to speak French. I want my dad and my grandfather's culture to keep going.”

Robitaille, who's in town touting his latest album, Univers parallèles, said he's looking forward to his headline performance at Le French Fest, which starts at Collège Boréal at 7 p.m. tonight.

“It was five years the last time I did a show here,” he said, adding that his parents actually lived here for a time in the 1970s.

“Sudbury has always been special for me. My first ever professional show was here in Sudbury in 2003. They've always been very supportive, the French community here.”

You can watch Robitaille's song about Sudbury below: