What's so creepy about Capreol? These young authors know 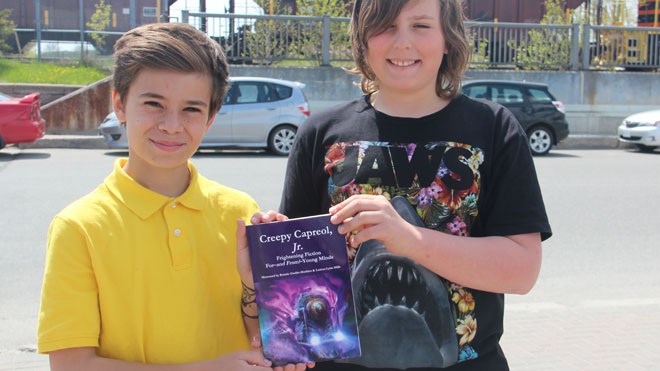 Liam Siemann (left) and Kael Perras, both 12, are now published authors. Short stories written by the tweens last year have been published in the new anthology “Creepy Capreol Jr.” Photo by Heidi Ulrichsen.

Liam Siemann may be just 12 years old, but thanks to a contest he entered a year ago, he's now a published author.

The Grade 7 Alexander Public School student won first place in the 12-and-under age category in the Wordstock 2015 Youth Writing Contest. The stories had to be creepy and set in and around Capreol.

Siemann's story, “Mommy's Here,” is about a nine-year-old boy whose mom goes to Toronto by train to get him a birthday present. His mom most unfortunately dies in a train crash, but that doesn't stop her ghost from visiting him.

One of the contest's judges was Matthew Del Papa, known for his short story collections about the Capreol area, including “Creepy Capreol” and “The Legend of Capreol Red And Other Stories from a Railroad Town.”

Siemann, who creates his own comic books and enjoys writing stories in English and French class, said it's “pretty cool” his story has been published.

Del Papa said he was amazed as he read the kids' stories last year.

“As I write in the introduction, their imaginations are just so vivid and wild,” he said. “You think the kids' stories are going to be tame and repetitive. They're all over the map, and some of the stuff, it's nightmare-inducing, really.”

The youngest author whose contest entry is published in the book was six years old when she wrote it — her story was submitted in crayon — and the oldest an 18-year-old high school senior.

“Deadlands” is about a Capreol kid and his dog who survive the zombie apocalypse by commandeering a train and travelling to a military base in Washington, D.C.

“When I entered, I didn't really think it would get published,” Perras said. “It was kind of exciting to be able to go see the book, and say 'That's my story. I wrote that,'” he said.

“A lot of people should try writing stories. It's quite fun. You get to imagine your own world and you own characters.”

The book is not yet in stores, although Del Papa said he's going to see if he can get it into Sudbury's Chapters and Coles locations.

If you'd like to purchase a copy of “Creepy Capreol Jr.,” you can pick one up for the special festival price of $15 at Graphic-Con June 11. It'll also be available at Capreol Days this summer.

You can also contact Del Papa at crashmat@cyberbeach.net to purchase a copy from him directly or visit www.lulu.com and search for the book's title to order one online.

Sudbury finds ways to celebrate Pride Month in spite of COVID-19
Jun 25, 2020 9:00 AM
Comments
We welcome your feedback and encourage you to share your thoughts. We ask that you be respectful of others and their points of view, refrain from personal attacks and stay on topic. To learn about our commenting policies and how we moderate, please read our Community Guidelines.