His father, William Morin, said the boy is well known in northern Aboriginal communities, where he's a regular fixture in the dance arena.
Mar 27, 2014 2:28 PM By: Heidi Ulrichsen 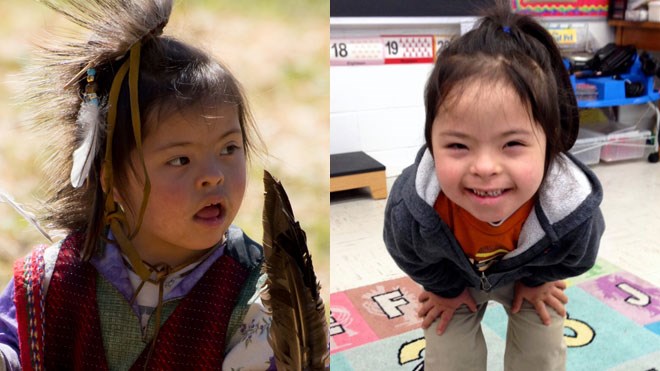 He often makes his way to the MC booth, and is welcomed to share a story with the crowd, which he does with gusto, although he has a limited vocabulary. He usually follows this up by the call of a crow or wolf.

His mom, Robin Morin, said when she's out and about, people inevitably ask her how her son is doing.

“His spirit shines brightly all the time and is greatly appreciated by everyone who meets him,” she said.

These “heroes” are people with Down Syndrome who have unique abilities and make contributions to their communities.

“The committee chose him because he's just unique,” said Kaitlyn Pecson, design and communications co-ordinator with the Canadian Down Syndrome Society. “He has this ability to dance and join his greater community in an inspirational way.”

The little boy isn't the first Sudburian to be singled out by the Canadian Down Syndrome Society. In 2011, Holly Wright, then 12, appeared on a local billboard as part of the organization's See the Abilities campaign.

Besides appearing on the society's website, the profile of Wii'um will also be printed in a magazine distributed among the organization's members.

Wii'um's father said he's inspired by his son's interest in Aboriginal culture. Besides dancing at pow-wows, Wii'um also smudges with his father every morning and sings and drums for his classmates at school.

“What he does is he reminds many of us within the Aboriginal community of the importance of our culture because he embraces it so openly and joyfully,” he said.

Morin, a local artist, said his son also seems to have inherited his artistic talents.

“At home, if he's not drumming, he's drawing and painting,” he said. “The walls are full of his creations.”

Wii'um has a mischievous and fun personality, he said. At the same time, he's “also very compassionate and conscious,” Morin said. “He senses other people's emotional state and will comfort them. He is very focused, very creative and patient.”

One of his teachers, Elissa Zuliani, said in his profile that when she first met Wii'um, he wasn't speaking.

“In the short time that I spent with him, his vocabulary had flourished,” she said. “But more important than his ability to communicate through words was his innate ability to connect with others — peers and adults — without words. Wii'um feels the world around him in ways that make you stop and think.”

Zuliani said Wii'um has made her want to be a better person — more like him, in fact.

“I saw, through the little things he did on a daily basis, how he cared for others,” she said.

“His actions spoke volumes about his character and the values he upholds. When a little boy who cannot communicate the way we do with words is showing you what compassion looks like, what patience looks like, what helping someone in need looks like, you cannot help but be humbled and ultimately look up to him as a hero.”