Acclaimed women’s trio Trent Severn will be featured April 14 in The Motley Kitchen’s Dinner and a Show series.
0
Apr 8, 2016 10:58 PM By: Sudbury.com Staff 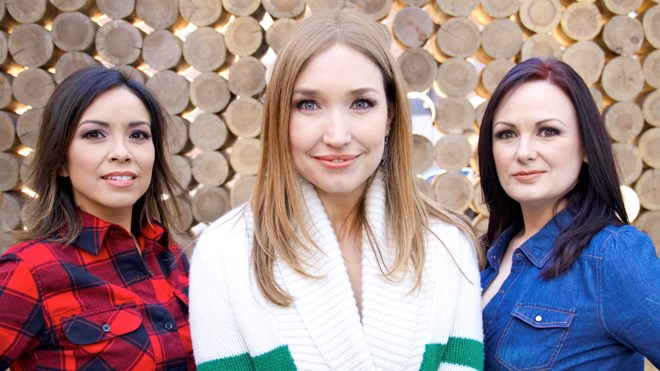 Acclaimed women’s trio Trent Severn will be featured April 14 in The Motley Kitchen’s Dinner and a Show series. Supplied photo.

Acclaimed women’s trio Trent Severn will be featured April 14 in The Motley Kitchen’s Dinner and a Show series.

Continuing the legacy of Ian and Sylvia, Stompin’ Tom Connors and Gordon Lightfoot, the Trent Severn’s live shows and two widely acclaimed albums and have created a lot of excitement in the Canadian roots music scene.

Nominated for two Canadian Folk Music Awards, they continue to win over fans from coast to coast with their acoustic, story-centred brand of music.

An appreciation for the little details and interesting stories that are alive in every community is at the heart of the trio’s musical ethos. Much in the way Stompin’ Tom immortalized Sudbury, Tillsonburg and characters like Bud the Spud, Trent Severn also choose to celebrate the scenery, folklore and personalities of the small-town Canadian heartland.

In 2013, Trent Severn became the first band to receive a phone call to a concert from space, when they played a live song for Commander Chris Hadfield while he was on The International Space Station. Trio member Emm Gryner also collaborated with Hadfield on a cover version of David Bowie's "Space Oddity," which was recorded partly onboard the space station.

Before the formation of Trent Severn, Gryner released several albums, two of which were nominated for Juno Awards for Best Pop Album of the Year. She had a stint singing and playing keyboards in David Bowie’s band, performing with Bowie at the Glastonbury Festival and other venues around America and Europe. She appears on the live album, “Bowie at the Beeb.”

In her solo days, Dayna Manning also received a Juno nomination, in 1998 for Best New Artist. After her first album release she toured North America for two years, performing on the first and second season of Lilith Fair.

She performed with Spirit of the West, 54-40, Joe Cocker, and opened for Radiohead. Her live track "I Want," recorded at the original Lilith Fair in Vancouver in 1997, was included on two Lilith Fair compilation recordings.

Fiddler Lindsay Schindler studied classical violin as a child, before finding her passion in playing fiddle music from many regions of the world as well as her own original compositions.

Schindler is a founding member of the popular Stratford-based group, ‘Rant Maggie Rant’ which has received a number of international awards and nominations, performing across the US and Canada as well as in Ireland and Japan.

The Motley Kitchen presents the Dinner and a Show Series in association with Northern Lights Festival Boréal.