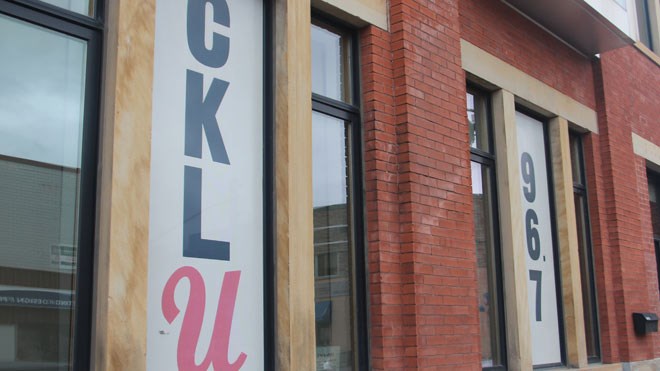 A combination of decisions by the province and Laurentian University created a financial crisis for CKLU, city council was told Tuesday.

Tannys Laughren, a member of the board of directors of the LU-based radio station, said new rules allowing university students to opt out of paying certain fees devastated the station's business model. That's why they were looking for $25,000 to help them cope.

“We would not be in this situation if Laurentian had done the opt out, instead of the opt in,” Laughren said.

Accessing the TVO radio tower costs them $15,000 a year, she said, and license and other fees are $3,000 a year. The station has laid off all eight paid staff, she said, most of whom still work at the station as volunteers.

What she was hoping for was to combine forces with the city to promote downtown using the station, a move that would benefit both.

“We're not asking for a bailout here — I don't like that term,” Laughren said. “We have operated in a fiscally responsible way.

“What we're looking for is a community partnership ... We just need a little bit of help” to adjust to the rapid loss of their funding.

Ward 5 Coun. Bob Kirwan, who moved the motion to provide the $25,000, said he hosted a show on CKLU for five years.

“For me to host a two-hour talk show was no problem at all,” Kirwan quipped.

Now that it's located downtown as part of the architecture school, he said it's in a perfect position to help promote area businesses.

CKLU could do so much more for the downtown core, he said. “It needs a boost. It's incredible the negative attitude people have toward downtown.

“If we can provide this investment to help CKLU get over this year and allow them to become sustainable in the long term. It's just getting through this first year.”

Ward 12 Coun. Jocelyne Landry-Altmann said the request puts the city in an unusual position. She wondered whether CKLU has approached the Downtown BIA for funding, since it is their business community that would benefit from the partnership. And the BIA provided $50,000 for the school of architecture, so there is a precedent.

She suggested deferring the motion to give CKLU time to explore other funding options.

“It would give you an opportunity to go to the BIA, to the alumni, maybe to Laurentian University themselves,” Landry-Altmann said.

Now that more people know the financial crisis was caused by the change in the fee structure, they may be willing to help.

Laughren said the university has already made it clear they would not help, especially since they are dealing with an operating deficit.

“It was clear from the start that we were on our own,” she said.

“We get these requests frequently,” Signoretti said, adding CKLU should exhaust other avenues first.

Kirwan agreed to the deferral, adding that the station is not begging for this, they are looking for people to work with them for the benefit of everyone.

“It should not be seen in a negative light,” he said. “They are looking for a partnership to move forward.”

Council deferred a decision until the Dec. 10 council meeting, to give CKLU time to talk to the BIA and other groups.

Anyone who wants to donate to CKLU to help them through the funding crunch can find a donate button at the station's website.

Overtime serving up spaghetti dinner in support of YWCA Genevra House
Feb 28, 2020 9:00 PM
Comments
We welcome your feedback and encourage you to share your thoughts on this story. We ask that you be respectful of others and their points of view, refrain from personal attacks and stay on topic. To learn about our commenting policies and how we moderate, please read our Community Guidelines.