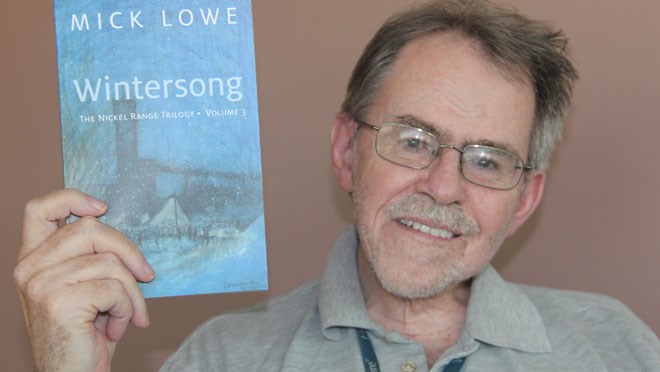 Award-winning Sudbury journalist and author Mick Lowe passed away peacefully at his home at Pioneer Manor this morning.

Lowe, who was 73, died as a result of complications from a fall he suffered about three weeks ago.

He was born in Omaha, Nebraska, and immigrated to Canada in 1970 as a Vietnam War draft dodger. Lowe’s journalism has appeared in a range of publications such as Maclean’s, Canadian Business, Canadian Lawyer, the Globe and Mail and on CBC Radio.

Lowe is also a former editor of Northern Life, Sudbury.com’s predecessor publication, and the author of seven books (with another pending publication), as well as a former lecturer in Cambrian College’s now-defunct journalism program.

He was well known for his coverage of issues such as health-care and local labour disputes.

In 2008, Lowe, who is a father, stepfather, grandfather and step-grandfather, suffered a stroke that left him disabled.

In his later years, he lived in Pioneer Manor due to his care needs, but he never stopped writing.

(You can hear from Mick himself below in a 2014 video story we did about the first in that series).

The last in the Nickel Range Trilogy series, “Wintersong,” was published in 2017, and focuses on the 1978-79 Inco strike, which lasted more than 10 months.

Lowe told Sudbury.com in 2017 he remembered that strike well, as he was in Sudbury for part of it. A freelancer with the Globe and Mail, Lowe gave up that job to work on behalf of the Steelworkers, writing copy for a union newsletter.

“Because the strikers were my friends and neighbours, I really wanted to take their side and do what I could to help them win, and I did,” he said.

Although involved with the strike himself, Lowe said he did a lot of research for the novel, interviewing some of the main players. “I learned a lot I didn't know,” he said.

In 2020, Lowe gave Sudbury.com an insider’s view of what it was like to live in a long-term care home during a global pandemic in the several columns he wrote for us on the subject.

On Feb. 27, 2021, Lowe shared with his Facebook friends that he was fully vaccinated against COVID-19.

Lowe’s wife, Anita, tells us that her late husband “did not go quietly unto the night.” Ever the journalist, he was “looking for a story right up until the end.”

A bit confused due to an infection, he thought he had big one when he was in the emergency department, she said.

Anita said Lowe was never bitter after his stroke, and loved Pioneer Manor, where he served as president of the residents’ council, often roaming the long-term care home at night to make sure the staff were happy and doing well.

“He wandered the halls like a little reporter in a wheelchair,” she said.

The couple were grateful he could still write after his stroke. And in fact, Anita shared that there is another Mick Lowe book that hasn’t yet been printed -- his autobiography with the working title "A Generation of Misfits" has been submitted to his publisher.

She wants people to know of her husband’s “unbelievable love for Sudbury.”

“I never met someone somebody who wasn’t born here who loved this community more than Mick Lowe did, and the people in it,” she said.

Lowe’s daughter, Julia Lowe, said in a Facebook message to Sudbury.com her dad was “simply the coolest.”

“My sister and I were lucky to have him to help mold and guide us in our values and sense of social justice,” she said.

“Among our friends he was known as the dad who blasted NOFX in the car, and always picked up young hitchhikers on the road and asked if they went to our schools.

“He wasn't born in Ontario, but he loved the Valley and Sudbury more than anyone I know, and was so proud to be a part of the community.

“The only thing he perhaps loved more was his Nebraska Cornhuskers -- he never missed a game, and always sported his game day gear to support the team. Mel and I will dearly miss our weekly Sunday morning Skype sessions. He was the best.”

Julia said she and her family feel Pioneer Manor “is a wonderful place, and he was really loved there, and we are so grateful to the staff for taking such good care of him for years, especially through these last few weeks and days.”

Former Northern Life owner Michael Atkins said he and Lowe were friends for more than 45 years.

According to a column written by Lowe in the final edition of Northern Life in March 2020, Lowe strode into the newsroom in 1974, and told Atkins he needed to hire him, so he did.

“Mick had a great sense of humour,” Atkins said. “He called himself and remained a communist in his eyes for some 30 or 40 years after. He had a great affiliation with labour issues.

“He was a social justice man. That was his perspective. He came out of the Vietnam war years, and was a draft-dodger into Canada. He had very strong views.”

Although Lowe had strong views, Atkins said he was a serious journalist.

“When he was writing a story, he would go to the sources,” he said. “He would do the work. He got the whole story … he kept his opinions out of it. But when he wrote a column, he had strong opinions.”

Atkins said he thought Lowe was “one of the bravest men he ever met.” He said he has his own physical limitations, and sometimes he gets frustrated, but Lowe never complained.

Although debilitated in his latter years, Lowe never lost his enthusiasm for life.

A transplanted Sudburian, Lowe “threw his whole soul into this community, and it gave back to him," Atkins said.

“He had many friends,” he said. “He had people that stayed by him for many, many years … He lived a life well lived. He, I think, made a difference.”

He told Sudbury.com in a Facebook message he and Lowe go back about 46 years, when they worked in radio together.

“Mick was the producer of the Morning Show and I was managing director of CBC news for Northern Ontario,” Catalano said.

He said he and Lowe drove all the way to North Carolina a few years ago to watch a football game.

“The ride there and back was the time of our lives,” he said in a Facebook message to Sudbury.com. “We drove all that way just so he could see his home state of Nebraska in a football game. Don't write anything about him without mentioning his beloved Cornhuskers.”

Lowe is survived by his wife Anita, daughters Julia (Jason) and Melanie (Jeremy), grandson Jonas, as well as his stepson Nick, stepdaughter Meg, and step-granddaughter Clara, and other extended family.

The family plans on holding a celebration of life once large gatherings are allowed.