Aboriginal consultations lengthy but necessary step for mine development

After many years of groundwork, KGHM's Sudbury operations expect to submit a report to their parent company in Poland by the end of October to approve further development and production of the Victoria Mine, says the company's local environment and c
Sep 21, 2015 9:01 PM By: Jonathan Migneault 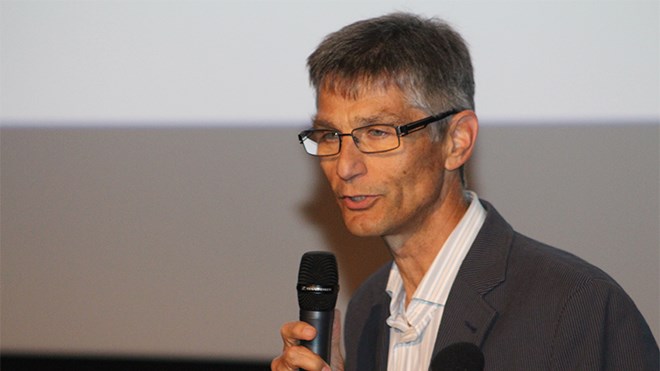 Ian Horne, KGHM's environment and community manager in Sudbury, addressed the Canadian Institute of Mining Thursday about his years of experience negotiating agreements with local first nations regarding the Victoria Mine's development. Photo by Jonathan Migneault.
After many years of groundwork, KGHM's Sudbury operations expect to submit a report to their parent company in Poland by the end of October to approve further development and production of the Victoria Mine, says the company's local environment and community manager.

Ian Horne addressed the Canadian Institute of Mining Thursday about his years of experience negotiating agreements with local first nations regarding the mine's development.

In 2010 the modernized Mining Act required mining companies operating in Ontario to consult with Aboriginal people before they could submit their mine closure plans to the Ministry of Northern Development and Mines.

The mine closure plan is a necessary part of any mining project.

“Once you get involved in something like Aboriginal consultation you realize the value and importance of it,” Horne said.

While the First Nations he consulted with all had the same basic priorities – jobs, youth development, education and financial agreements – Horne said the negotiating process turned out to be a long and challenging process.

It took almost five years, for instance, to reach an agreement with the Sagamok First Nation – located 60 kilometres west of the project.

With the Atikameksheng First Nation – which is closest to the Victoria Mine site – negotiations halted for around a year before they resumed again.

“It took that break, almost, for both sides to calm down and understand what they needed to do,” Horne said.

Atikameksheng First Nation Chief Edward Miller said it was important to find solutions to disagreements between his community and KGHM.

But the signed agreement only marks a first step for the ongoing relationship between his community and KGHM, Miller said.

As the project advances and evolves, that relationship will also evolve, he said.
On Sept. 2, 2015, KGHM reached a third agreement when it signed a memorandum of understanding with the Métis Nation of Ontario.

While the Métis Nation of Ontario does not have land rights at the mine site, KGHM had an obligation to consult with the organization on constitutional grounds.

The company expects production of 3,500 tonnes per day once the mine is up and running.
KGHM will spend $30 million at the mine site this year to fund engineering, sub-collar excavations, a collar foundation, a retaining wall for a sub-station and a mine water pond.

Victoria Mine is expected to employ between 150 and 300 people in full production, KGHM said.

While the company's McCreedy West nickel mine in Levack is scheduled to enter care and maintenance in October, a representative with United Steelworkers Local 2020, which represents KGHM's workers in the Sudbury area, said he doesn't expect that mine's closure to affect the Victoria Mine project.

“I know that Victoria is a big priority for KGHM, and I think that project will still be going ahead,” said Myles Sullivan, an area co-ordinator with the United Steelworkers.

“It's a higher grade deposit (than McCreedy West). It's a very good deposit, and that will be going ahead from what I've been told.”