Abuse victim writes to the Pope

Jerome Myre has written a letter to Pope Francis, and is hoping for a personal reply. While it's a long shot, he's got a better chance of hearing from the pontiff than most of us. Myre was 12 years old when he was sexually abused by Fr.
Oct 23, 2013 2:15 PM By: Darren MacDonald 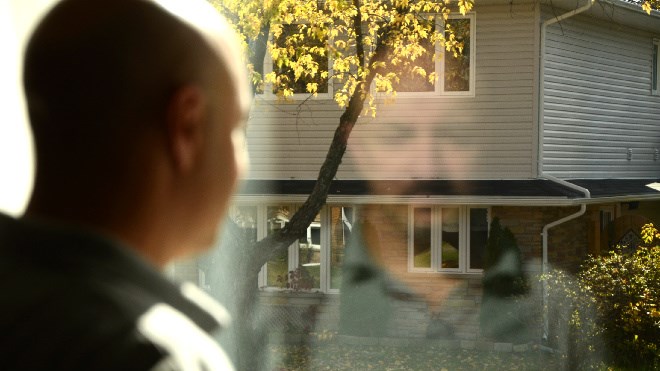 Jerome Myre was 12 years old when he was sexually assaulted by Fr. Bernard Cloutier, a former Sudbury priest who was convicted in 2009 for assaulting five victims in the 1970s and 1980s. Myre has written Pope Francis to ask him to defrock the disgraced priest, who was denied parole last month. Arron Pickard photo.

Jerome Myre has written a letter to Pope Francis, and is hoping for a personal reply. While it's a long shot, he's got a better chance of hearing from the pontiff than most of us.

Myre was 12 years old when he was sexually abused by Fr. Bernard Cloutier, a former priest who was convicted in 2009 for incidents that took place in Sudbury, Espanola and Massey. Myre, who is allowing his name and face to be made public, was one of five victims abused between 1974 and 1983. He attended a parole hearing last month, where he and another victim read their victim impact statements, doing their part to ensure Cloutier, 71, serves his full sentence, which runs until Oct. 14, 2014.

While no longer a Catholic, Myre says he still believes in God. But not in a church that refuses to defrock priests who abuse children. So he's written the Pope, asking for a change in policy.

“I think it would show some good faith to victims around the world,” Myre said. “To me, they shouldn't have any status whatsoever.

“I hope he sends me a response. And I hope it's from him, and not one of his flunkies in his office.”

Myre says the trip to the Pittsburgh Institute in Kingston – where Cloutier is being held – was more repetitious than cathartic. But he believes if they didn't go, they might have set the disgraced priest free.

“So our duty as victims doesn't ever seem to be really over.”

He was irked at the comfortable conditions at the facility, which he compared to low-income housing units in Sudbury. Inmates at the minimum-security facility have a 10:30 p.m. curfew, and live in row housing, with three people living in each row house.

“It's very comfortable,” Myre said. “The fridges at the Pittsburgh Institute was probably fuller than a lot of the fridges in low-income housing in Sudbury.”

He noticed they wore normal clothes and were able to leave the grounds.

“I asked the warden, 'Can the inmates just leave and go to Kingston?' And she said they could, but there would be consequences,” Myre said. “I don't think he's really being taught a lesson, or being punished for what he did.

However, Myre said he had a good idea of what to expect before he got there. But he was surprised to learn that Cloutier has $300,000 in his bank, while his legal bills to defend a civil suit are being paid by the Diocese of Sault Ste. Marie.

So he asked his lawyers to include a clause that would have Cloutier make a donation out of his own pocket to a charity that helps abused children.

“He has to pay something, he can't just walk away from this,” Myre said. “But I'm not holding my breath.”

A mediation is scheduled next month with the victims' lawyers, as well as lawyers from the diocese and the insurance company. Myre said it's possible they could avoid a civil trial if they can reach an agreement then. Otherwise, a trial is scheduled for June 2014.

In denying Cloutier parole, the board cited his refusal to take responsibility for what he had done, and the impact it had on his victims. Myre said he just doesn't seem to get it.

When they asked him if he accepted his guilt and the consequences, Myre said Cloutier mumbled.

He's also concerned that when Cloutier is released, he will vanish. He was supposed to live with a sister in North Bay, but she has since died. His brother is also fighting cancer, so Myre wonders – what will happen next October?

“He will be monitored for the first couple of years when he gets out,” he said. “But after that, we could lose track of where he is.”

As far as healing, Myre said that's a process that never really ends. But seeing Cloutier serve his entire term in jail will be a step forward.

“I was the first of five victims to come forward, so, as far as I knew, I was going to be alone in facing all the proceedings,” Myre said. “That to me, along with the civil suit, will be closure for me. I can say that I was able to see the whole criminal process, from start to finish, and see it through. And, obviously, I wasn't able to do that as a 12-year-old.”

–Pittsburgh Institution is a minimum-security facility located 23 kms northeast of Kingston. It opened in 1963;
-Inmates are housed in 35 living units, including three reserved for private family visits. All offenders are males;
-It has a capacity to house 250 inmates, with work underway on a new, 50-bed living unit.
-Inmates can take correctional courses, further their education, take part in recreational activities and get job training, all intended to help them re-integrate into society once released.