Committee co-ordinator Sarah Woods managed to photograph one of the rare reptiles, and has since found a total of nine.
May 25, 2014 12:51 AM By: Heidi Ulrichsen 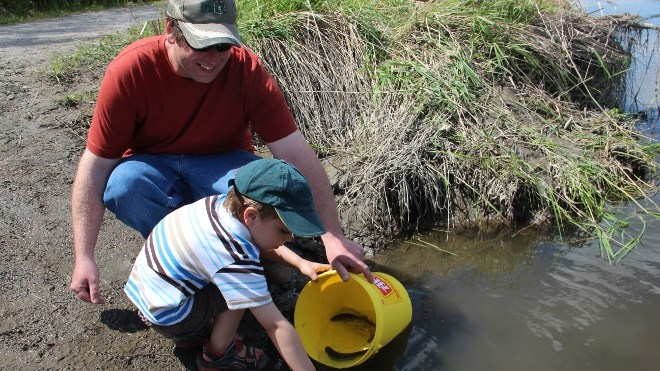 Benjamin Marcotte, 4, releases live brook trout at a May 24 event celebrating the 15th anniversary of the Junction Creek Stewardship Committee. Photo by Heidi Ulrichsen.
Committee co-ordinator Sarah Woods managed to photograph one of the rare reptiles, and has since found a total of nine.

Thanks to a government grant, the community environmental group has now hired a summer student to find out just how many of the turtles are in the creek, and where they live and lay their eggs.

“For a city like Sudbury that used to be called the city that looked like the moon to have a threatened species living naturally in the downtown is really quite special,” said committee member and local biologist Franco Mariotti.

He made the remarks during the Junction Creek Stewardship Committee's 15th anniversary celebration, held at Adanac Ski Hill May 24.

Children were able to get up close and personal with a live Blanding's Turtle from Science North during the event, which also included the release of 1,000 live brook trout into Junction Creek, tree planting and children's activities.

The Junction Creek Stewardship Committee was started in 1999 by citizens inspired by the city's regreening efforts, Mariotti said.

“We could point to regreening and say if we can do that, surely we could put a little bit of life back into the creek,” he said.

Fifty thousand kilograms of garbage has since been removed, 1,000 brook trout have been released a year since 2001, and 70,000 trees and bushes have been planted, said Shannon Dennie, the co-ordinator of the Junction Creek committee along with Woods.

Because Junction Creek runs 23 kilometres through Garson, New Sudbury, the downtown and into Kelly Lake, the committee partnered with numerous community groups, who have adopted sections of the creek.

“We're seeing less and less garbage, that's the great thing,” Dennie said. “These groups are not coming out every year to pull out garbage. They're coming out to plant trees instead or to do other restoration activities along the creek.”

A decade ago, surveys of some parts of the creek turned up only two different types of minnows, Mariotti said. Those same sections now have 12 different species of minnows, as well as aquatic insects.

Although constant restocking of the brook trout is necessary because of fishing, Mariotti said some of the fish are surviving.
“We caught a brook trout that was eight to 10 inches,” he said.

Getting families involved in the restoration efforts isn't just a nice gesture, it's crucial, Mariotti said. Releasing live fish into the creek is something kids will remember for a long time, he said.

“Imagine that child going back to school, and they see a friend throwing a pop can or some plastic into the creek,” he said.
“How do you think that child is going to respond? The immediate response is 'Wait, I put live fish in there, what are you doing?. So it's a great way of creating ownership.”

Laurie Twilley attended the event with her children, Kayla, 12, and Jayden, 10, who released fish into the creek and held the Blanding's Turtle.

“I think it's very important to help out Junction Creek and for them to be aware, and just to learn about it,” she said. “Maybe as adults they'll ... try to care for it themselves.”

Kayla said she'll be on the lookout for Blanding's Turtles this summer, and plans to snap a photo if she sees one. She said she thinks the event was a good learning experience.