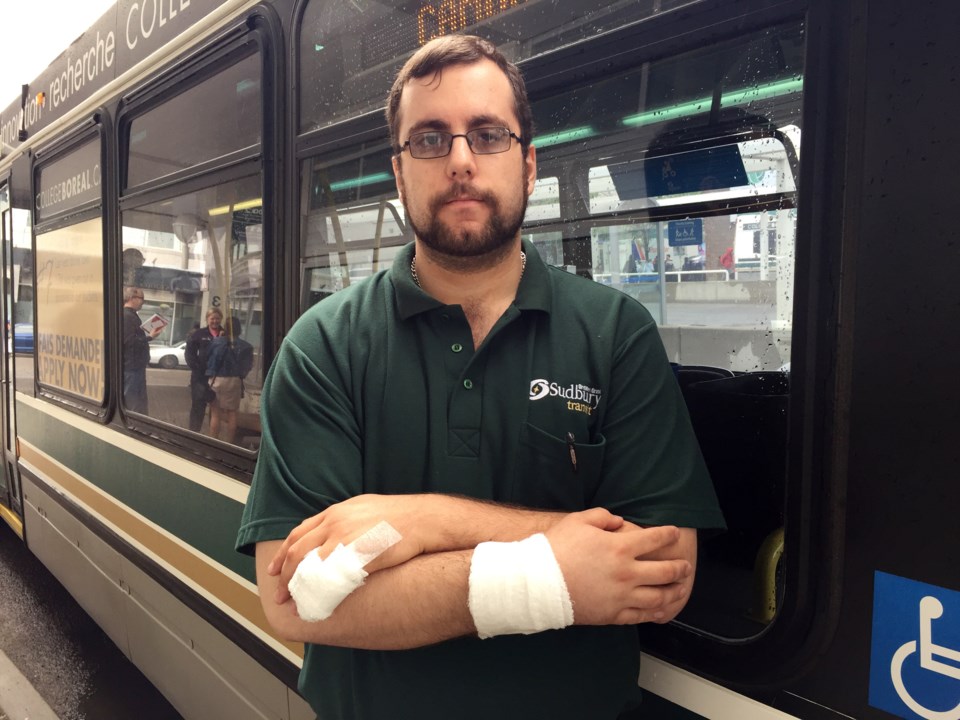 A pilot project to test the glass barriers for transit drivers was launched following a May 2017 attack on driver Steven Blondin. (Heather Green-Oliver/Sudbury.com file photo)

While some transit drivers said they hampered their communication with riders, a pilot project testing protective barriers on buses was well received, says a report headed to the community services committee next week.

Launched in February 2018, added protection for GOVA drivers was prompted by concerns over periodic attacks, particularly one in May 2017.

Steven Blondin received 20 stitches when a distressed man attacked him.

The incident highlighted the danger bus drivers face and prompted a review of their security.

Barriers had been considered in the past after attacks, but the drivers themselves resisted having them installed. Even Blondin said in 2017 he wasn't sure they were a good idea.

“That's a double sided coin,” Blondin said, when asked his thoughts on the barriers. “Yes, it would have stopped the situation altogether. But also, it keeps us away from the passengers. It eliminates that friendliness that we have. So there's pros and cons.

“I do like being able to have that (personal rapport) with the passengers. To be behind glass would diminish that to an extent. But having that barrier would help keep us safe.”

The report to be heard at the committee's Dec. 2 meeting found more than half of drivers – 54 per cent – said they could still communicate with passengers with the barrier in place, while the rest said it was an impediment or didn't have an opinion.

The report recommends adopting a barrier that has a sliding window, allowing drivers to interact more easily with passengers.

Other cities that use them “ensured that the barrier installed had a sliding window, and most operators grew comfortable with the glass partition,” the report said.

Another concern about the glass barriers is they can make it more difficult for drivers to see.

“Although most did not feel that the glazing material used on the barrier generated glares or reflections while driving, almost half of the operators felt that the barrier affected sight lines,” the report said.

A test was done by transit management staff, who concluded the glare was not an issue as long as drivers practised a technique known as “rocking and rolling.”

“The rocking and rolling technique requires that the operator physically move forward and backwards in the seat to see around obstructions,” the report said.

“During discussions with other municipal transit agencies, it was confirmed that they had similar concerns from operators prior to installing barriers. Additional training of proper driving techniques and additional engagement resolved operator concerns with visual hazards.”

Overall, 75 per cent of drivers surveyed in Greater Sudbury supported making the barriers permanent, although less than half of them completed the survey.

While recommending barriers be included in all new bus purchases, it will be up to the committee, and city council, whether to proceed.

Ontario announces extension of hydro relief fund, support for retirement homes
May 31, 2020 4:00 PM
Comments
We welcome your feedback and encourage you to share your thoughts. We ask that you be respectful of others and their points of view, refrain from personal attacks and stay on topic. To learn about our commenting policies and how we moderate, please read our Community Guidelines.