After the smoke clears: Inside vaping culture

On a late afternoon in December, Sunday more specifically, a group of half a dozen 20-somethings hang out inside a shop on Barrydowne Road, seated in a circle on couches and chairs, with a hazy cloud hanging overhead.
0
Dec 23, 2015 5:50 PM By: Matt Durnan 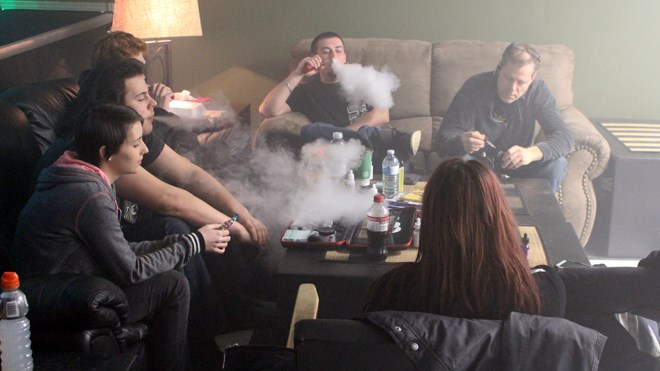 On a late afternoon in December, Sunday more specifically, a group of half a dozen 20-somethings hang out inside a shop on Barrydowne Road, seated in a circle on couches and chairs, with a hazy cloud hanging overhead.

Bottles of pop and what appear to be medicine jars are scattered about the table in the centre of the group, as the guys (and girls) take turns blowing out giant clouds of what many would assume to be smoke.

As recently as a year ago, that much may have been true as these are all former smokers. But these reformed smokers — like tens of thousands across North America — have found a new, and apparently safer, oral fixation: Vaping.

Several well-designed studies support the argument vaping is safer — considerably safer — than smoking tobacco. It still delivers nicotine (which itself is not good for you), but because it delivers the chemical in a cloud not unlike what's created by fog machines at rock concerts, vapers aren't inhaling the tar and carcinogens that come from smoking a burning plant. Although more study should be done, many doctors have endorsed e-cigarettes as a safer alternative to tobacco.

But vaping to these people is more than just a healthy alternative to cigarette smoking, it's developed into its own sub-culture that is rapidly gaining popularity.

At its core, vaping is very much an aid to quit cigarettes, and it's the sense of accomplishment that smokers experience when they're able to kick their habit that has created a familial environment among vapers.

“There's definitely a level of camaraderie that stems from quitting smoking,” said Peter Piper, owner of Sudbury's Juice on the Loose, the Barrydowne shop that's become ground zero for the city's vaping culture.

“It's something that you and other vapers have accomplished, it's a hill that you've gotten over and it's just natural for people to gravitate towards others who have been through the same thing.”

While Sudbury's vaping crowd is still somewhat in its infant stages, close to 600,000 Canadians are vaping and the culture continues to gain steam, to the point there are stereotypes popping up about those who vape.

“In any group that have a shared interest there's always going to be people who might shed a negative light on it,” said Arthur Cavallin, manager at Juice on the Loose.

The store's satellite location is a kiosk in Rainbow Centre. The kiosk is operated by Matt Boucher, another smoker turned vaper, who's smoker friends like to crack wise about Boucher's new preference.

“I have a friend who calls vaping the 'Starbucks of smoking,' so I guess it does have a bit of a hipster image, but really, it's for anyone,” said Boucher. “I think deep down, everyone kind of hates their habit (smoking). You see people huddled up outside in the winter, and they just don't look like they're enjoying themselves.”

When Boucher says it's for anyone, he means it. Smoking, which is viewed as a habit, is pretty straightforward: You buy a pack of cigarettes and smoke them. Occasionally, you may blow a smoke ring or two.

Vaping, while still feeding a nicotine addiction (for those who purchase e-juice containing nicotine), is more like a hobby for some vapers. With new juice manufacturers cropping up all the time and an ever-expanding array of flavours to try, vapers are always testing out new tastes and mixtures.

A quick tour around Juice on the Loose with Nick Creighton, who frequents the shop regularly, is like a rapid-fire trip down memory lane, although he has been vaping for only a year.

“This is the one I first started out on,” said Creighton, holding up a small bottle labelled 'Fresh Tobacco' by e-juice maker Gold Seal.

“I was vaping this one for a while because I was worried that if I started getting into the fruit flavours and stuff I would want to go back to cigarettes, so this one was the easiest transition for me. But after a while, I started branching out and wanted to try all the different flavours.”

The mod's the thing

For the hobbyists, though, vaping is more than sampling flavours like some e-juice sommalier. Creighton, like Cavallin, is a tinkerer and the two have jumped in with both feet to the aspect of vaping that really appeals to the hobbyist: Modding, building their own coils to maximize the "cloud" of vapour that's created.

A vape is really a small wire coil attached to a battery. The coil sits in a bath of e-juice. The vaper presses the button, sending a small electrical charge into the coil, at the same as he or she inhales, drawing the e-juice over the coil. The heated coil transforms the e-juice (which is a mixture of food-grade propylene glycol, vegetable glyerin, colouring, flavouring and nicotine) into a cloud of vapour.

It's the sub-ohm vapers (who mod to create low resistance coils) who produce the biggest clouds, enabling them to perform some pretty impressive tricks. This is not your grandfather's smoke ring, people. Vape trick competitions and vaping conventions are springing up across the country.

“I've always liked to work with my hands so it was something I took an interest in,” said Creighton.

Cavallin said that with modding growing in popularity, the resources that can be found online are not only plentiful but can be helpful to anyone new to vaping.

“I took electrical engineering in school and I like to tinker and customize things,” said Cavallin. “But I don't just start pulling things apart, I always spend three to four days researching online, reading and watching videos before I do anything.”

The goal in most modifications is to control the amount of vapour you're inhaling, and thus exhaling. More vapour means bigger clouds and the ability to do tricks and blow shapes, a trend that has spawned competitions and hundreds of videos on YouTube.

“There's kind of an art aspect to it,” said Cameron Balogh, another regular to the Sunday sub-Ohm sessions. “Everyone has their own style of vaping.”

Everyone who gathers at Juice on the Loose on Sundays met through vaping, and the sense of community is something they all agree they felt as soon as they made the switch from cigarettes.

“It's a very social thing,” said Piper. “Vapers always seem to be willing to share and introduce each other to the new flavours they've tried and the gear they're using.”

With New Year's right around the corner, there will undoubtedly be a fair share of smokers swearing off cigarettes in 2016, and the vaping community will likely continue to grow.

For more info about Juice on the Loose, visit their website, JuiceOnTheLoose.ca or visit them at 765 Barrydowne Rd., Unit 102 (downstairs).

Feds to introduce bill dropping some restrictions on assisted dying
Feb 26, 2020 10:00 PM
Comments
We welcome your feedback and encourage you to share your thoughts on this story. We ask that you be respectful of others and their points of view, refrain from personal attacks and stay on topic. To learn about our commenting policies and how we moderate, please read our Community Guidelines.