Angels in Pink donate $10K toward new MRI for HSN 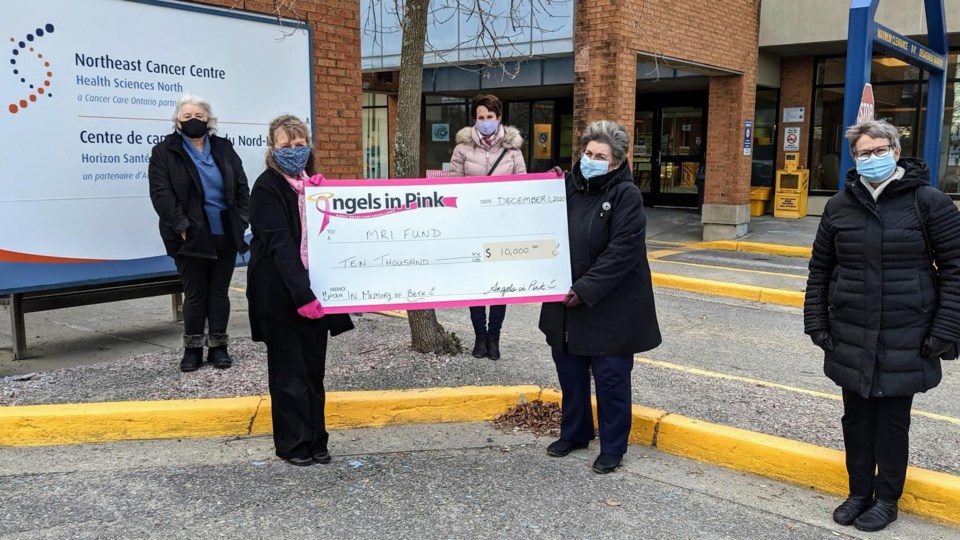 Members of the Northern Cancer Foundation's Angels in Pink Fund alongside sisters of former member Beth are proud to donate $10,000 to the Unlock the Potential MRI Fundraising Campaign at Health Sciences North in Beth’s memory. (Supplied)

The Northern Cancer Foundation announced Tuesday that the Angels in Pink has donated $10,000 to support the purchase of a new MRI for Health Sciences North and upgrade the current MRI.

The Angels in Pink were inspired to make this donation in memory of former Angel in Pink and friend Beth whose dedication to breast cancer awareness and support is sorely missed.

The Angels in Pink Fund, led by breast cancer survivor Annette Cressy, was created as a means of raising money to purchase equipment for the Northeast Cancer Centre that facilitates the early diagnosis of cancer.

In 2012, the Angels in Pink contributed to the purchase of a breast coil for HSN’s current MRI system and since have purchased several pieces of early diagnosis breast cancer equipment.

Health Sciences North is the only academic hospital of its size that operates on only one MRI.

Because of that, the average patient waits much longer to receive an MRI in northeastern Ontario than many other areas in the province.

"Our single-MRI system is in operation 24 hours a day and seven days a week, meaning that patients are not only travelling from surrounding communities at all hours of the day, but if there is unexpected maintenance, their appointment may be cancelled or rescheduled," said a news release from NCF.

Unlock the Potential is a joint fundraising campaign created by the Northern Cancer Foundation, Health Sciences North Foundation and NEO Kids Foundation with the goal of raising $7 million to upgrade the existing MRI unit and purchase a new 3 Tesla MRI.

Unlock the Potential is aimed at providing fair and equitable MRI access to patients in northeastern Ontario.

“Over the years, the Angels in Pink have made a huge difference in the lives of our patients," said Anthony Keating, President and CDO of Foundations and Volunteer Groups at HSN.

"Choosing to donate $10,000 to Unlock the Potential will bring us one step closer to the purchase of a new MRI and updating HSN’s current MRI and we are extremely grateful for their support.”