Annual Buddy Walk for Down Syndrome set for Nov. 3

Like most babies, 11-month-old Ireland Kohut loves to be the centre of attention. “If nobody's paying attention to her, she'll make you pay attention to her by screaming or making noise,” said her mom, Kayla Kohut. “She's very lovable too.
Oct 24, 2013 7:55 PM By: Heidi Ulrichsen 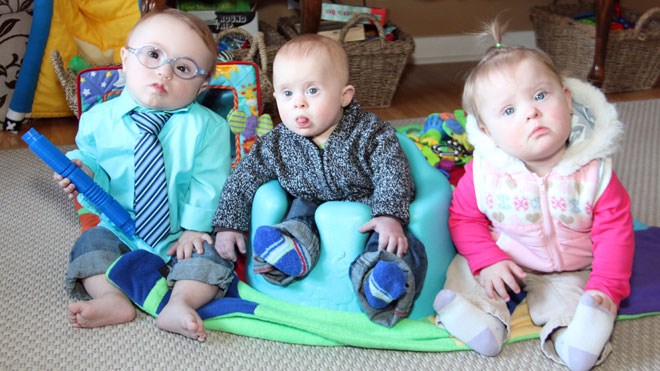 Eric Gratton, one, Evan Martin, seven months, Ireland Kohut, 11 months, and their families will be among those participating in the seventh annual Buddy Walk for the Down Syndrome Association Nov. 3. The walk, which raises awareness for the acceptance of people with Down Syndrome, takes place starting at 11 a.m. at Lockerby Composite School. Photo by Heidi Ulrichsen.

Like most babies, 11-month-old Ireland Kohut loves to be the centre of attention.

“She's very lovable too. Every time you walk in the room, she'll smile. She definitely has her own little personality.”

While it's obvious the toddler is the light of their lives, Kohut and husband Matthew received something of a shock when she was born. They were told she has Down Syndrome.

“At first I thought it was something I did,” she said.

“There was a couple things during my pregnancy where I thought 'Maybe I should have told the doctor.' I know it's not my fault. There's nothing I could have done. It's just the luck of the draw, pretty much.”

Down Syndrome is a naturally-occurring chromosomal arrangement that has always been a part of the human condition. It is present in about one in 800 births in Canada.

The sole characteristic shared by all persons with Down Syndrome is the presence of extra genetic material associated with the 21st chromosome.

It is typically associated with physical growth delays, a particular set of facial characteristics and intellectual disabilities.

Down Syndrome Association of Sudbury president Lisa Wright said raising awareness of the condition is particularly important this year given that Ireland is one of eight Down Syndrome babies born in Sudbury in the past year, an unusually high number, she said.

“There's no really rhyme or reason for it,” said Wright, whose 14-year-old daughter, Holly, also has Down Syndrome. “It's just the way it is this year. Typically, we get about four calls a year.”

She said while people can usually identify someone with the syndrome due to its recognizable facial characteristics, most can't tell you anything about the condition.

People with Down Syndrome can range from those who are high-functioning to those who aren't, but Wright prefers the focus to be on what they're able to do instead of what they can't.

With improved education and therapy, life is also much better for those with Down Syndrome than it was in the past, she said.

Julie Gratton, whose son Eric Gratton turned a year old earlier this month, said her biggest hope for him is acceptance.

One of the ways the Down Syndrome Association of Sudbury raises awareness is through their annual Buddy Walk. This year's event takes place Nov. 3 starting at 11 a.m. at Lockerby Composite School.

The Down Syndrome Association of Sudbury also provides a number of services to people with Down Syndrome and their families, Wright said.

For families with very young children, such as the Kohuts, there's a new parent support group. There's also activities for older children and even adults, she said.

Paula Cunningham, whose seven-month-old son, Evan Martin, also has Down Syndrome, said she and her husband, Drew Martin, have really appreciated being able to meet with other parents going through the same thing.

“They're really fantastic resources, because they just went through this a few months ago,” she said. “We're able to ask 'Is this normal?' You shouldn't compare children, but you compare notes.”