The North Shore Tribal Council and the Sudbury Coalition Against Poverty (SCAP) took to the streets of downtown Sudbury on Nov. 22 to protest cuts to a social assistance program.
0
Nov 22, 2012 9:39 PM By: Mark Gentili 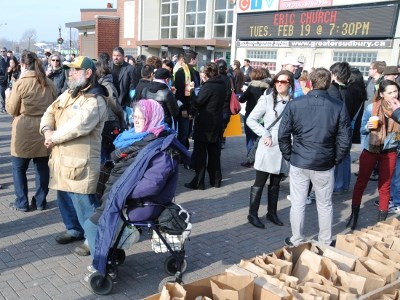 Around 150 demonstrators from the North Shore Tribal Council and the Sudbury Coalition Against Poverty rallied in downtown Sudbury on Nov. 22 to protest changes to a social assistance benefit program. Photo by Marg Seregelyi

The North Shore Tribal Council and the Sudbury Coalition Against Poverty (SCAP) took to the streets of downtown Sudbury on Nov. 22 to protest cuts to a social assistance program.

Around 150 demonstrators chanted slogans and waved placards as they marched from Sudbury Arena, past the Samaritan Centre to wrap up in front of Sudbury MPP Rick Bartolucci's office — the same office where 11 members of SCAP were arrested and charged with trespassing during a Nov. 9 demonstration against changes to the same program.

Around 150 demonstrators from the North Shore Tribal Council and the Sudbury Coalition Against Poverty rallied in downtown Sudbury on Nov. 22 to protest changes to a social assistance benefit program. Photo by Marg Seregelyi

There were no arrests this time out.

The demonstrators are particularly angered by planned changes to the Community Start Up and Maintenance Benefit program for people on Ontario Works and the Ontario Disability Support Program. The benefits program gives up $1,500 every two years to families (less for singles) facing eviction and those in danger of having their utilities cut off or fleeing domestic violence, among other uses.

Gary Kinsman, a Laurentian University sociology professor and one of the SCAP 11 arrested Nov. 9, said his group and the tribal council are “united” in their opposition to what they say are planned cuts to the program.

“It's a lifeline for people on Ontario Works and Ontario Disability Support Program,” Kinsman said. “It's one of the only benefits that allows people to move, that prevents them from becoming homeless, to replace furniture in a bed bug infestation.

“And it's the only benefit that exists to help women and children flee violent and abusive situations.”

Kinsman said the program is facing a 50-per-cent budget cut as of Jan. 1.

Not so, Bartolucci told Northern Life two weeks ago. On paper, it might appear the program is being cut, but in actuality, the benefit program is facing administrative changes to make it more efficient.

The MPP said it and several similar programs used to fall under the responsibility of several different ministries. Come the New Year, the programs will be combined, which will free up funds to be used in other programs. No services are being reduced, he said.

According to SCAP, 16,000 people a month across Ontario turn to the benefit program. The group and its supporters argued changes to the program will increase homelessness and hardship for thousands of people.

For the tribal council, the demonstration was more about a lack of funding than a change to a program.

Chairman Chief Lyle Sayers of Mamaweswen, the North Shore Tribal Council, said the council's seven First Nations want to know why the Ministry of Children's and Youth Services has not allocated new resources to enhance aboriginal child and youth mental health and addictions services to the North Shore communities.

Ministry officials, the council said in a news release, have allocated new resources for 26 new positions entirely to Aboriginal organizations that do not serve the North Shore region.