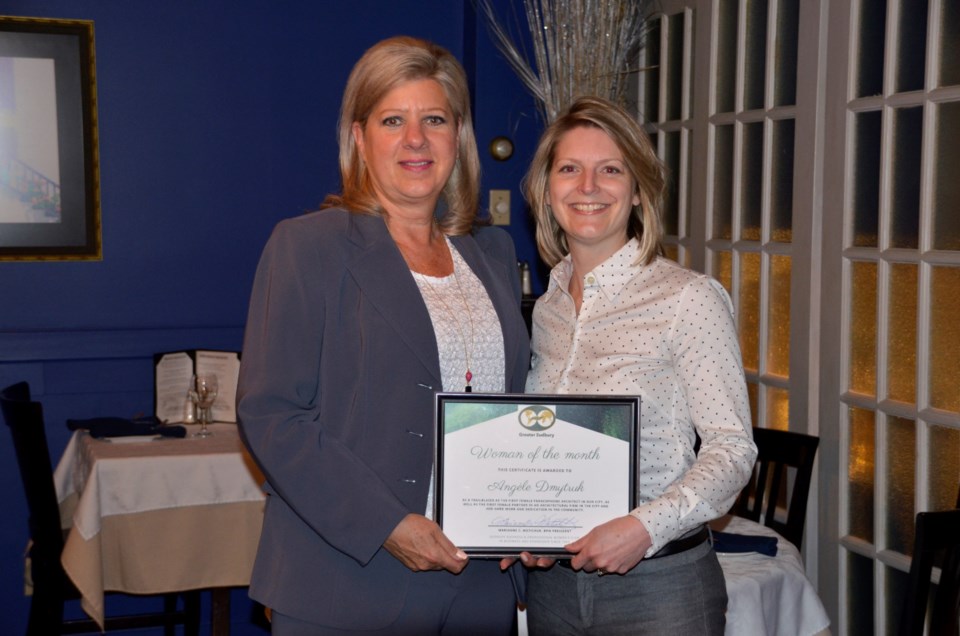 BPW Greater Sudbury has recognized architect Angèle Dmytruk as its Woman of the Month for April.

Dmytruk is born and raised in Sudbury, and has worked tirelessly to become one of the first female francophone architects and a partner practicing at 3rdLine Studio here in the Nickel City.

She started as an intern architect in 2010 and in 2018 become a partner at 3rdLine Studio Architects and Polestar CM Inc.

Dmytruk brings a wide range of experiences, both culturally and professionally. to her role and in her approach to design at 3rdline Studio.

She acquired her undergraduate degree at Ryerson University in 2006 and in the following years, Dmytruk lived and worked in Southern Ontario specializing in high-end residential design.

She later relocated abroad to immerse herself in the European culture and architectural design. She completed a Master's of Architecture at Lawrence Technological University in Southfield, Michigan.

Upon graduating in 2013, she continued her work in the Greater Detroit area contributing to community minded projects such as a Master Plan for Detroit Rouge Park, an incentive that focuses on developing safe living areas, public housing developments and parks for families in Detroit.

An active member of the community, Dmytruk co-founded the non-profit organization Detroit Trees, with the intention to focus on active approaches to reduce gun violence in the community.

With 12 years of experience in the field and having taken on a leadership role, Dmytruk strives to encourage young women to develop professional leadership skills through mentorship both in the community and workplace.

She is passionate and dedicated to helping others, and focuses her efforts on contributing to the Sudbury community.

She is an active member with the Business and Professional Women’s Club of Greater Sudbury (BPW), and is a part-time professor at Collège Boréal.

Moving forward, Dmytruk hopes to contribute to communities across the north using her skills and talents.

“Angèle is truly a trail blazer who is advancing women and breaking the glass ceiling through her hard work and community involvement,” said BPW Greater Sudbury president Marianne Matichuk, in a press release.