Mine rescue competitions happening across Ontario this week
May 3, 2019 11:00 AM By: Len Gilllis 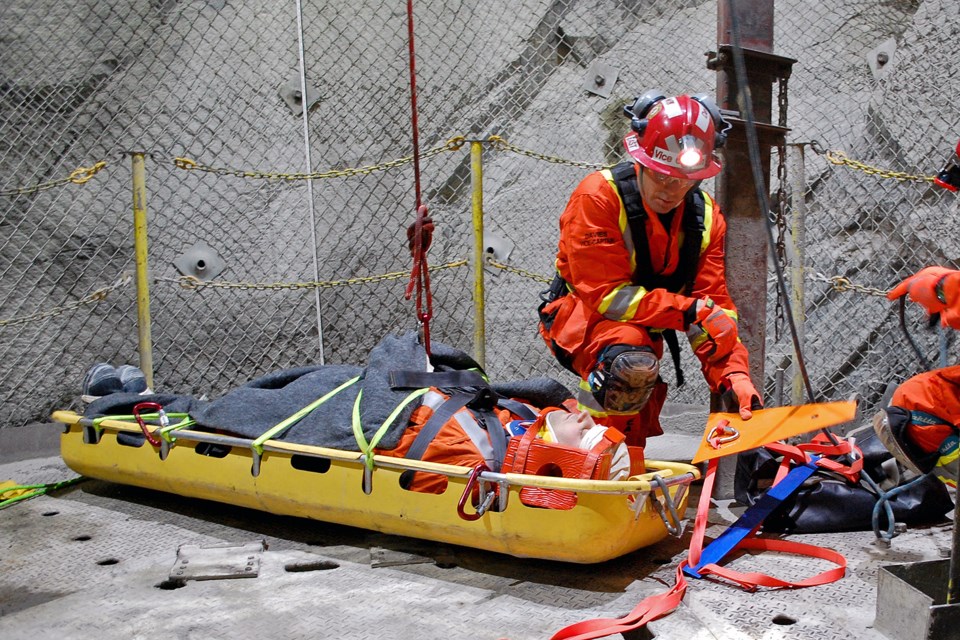 A Vale Canada mine rescuer checks on his patient in 2018 competition. (Ontario Mine Rescue Photo)

A small group of Sudburians who represent a huge segment of the local mining community will be pitting themselves both mentally and physically this coming week as they compete for bragging rights in the annual Ontario Mine Rescue competitions.

The event is held each year to allow mine rescuers and mine rescue officers to hone their skills while at the same time solving unusual problems that might occur in a mine emergency.

The event could have an added sense of earnestness this year, as Ontario Mine Rescue celebrates its 90th anniversary as a formal rescue agency.

It was created in 1929, one year after the tragic fire at the Hollinger Mine in Timmins where 39 men lost their lives when a fire broke out one winter morning; Feb. 10, 1928. At the time it was one of the worst mining disasters in Canadian history, happening at the largest gold mine in North America.

The details were recounted in Sudbury in April when Workplace Safety North held a mining safety conference. Ted Hanley, vice president of Ontario Mine Rescue, revealed the fire broke out in a massive garbage pile in an empty stope on the 550 level. Deadly, choking smoke and carbon monoxide slithered through the tunnels and raises, claiming the lives of unsuspecting miners.

The story was carried on the front page of the venerable New York Times the next morning.

At the time, there were no mine rescue specialists in Timmins, or anywhere else in Ontario for that matter. No one knew how to deal with the build-up of smoke and poison gas. A royal commission would reveal that no one actually expected that a fire could occur in a hardrock mine.

The call went out to the U.S. Bureau of Mines for help. Coal miners in Pennsylvania were known to have special breathing apparatus to allow them to enter a smoke-filled mine.

The American mine rescuers were rushed by steam train to Timmins to begin the job of redirecting ventilation, fighting the fire and recovering the bodies.

Within days, a coroner's inquest was being held and Ontario Premier George Ferguson ordered the creation of a royal commission to determine the cause of the disaster and to take remedial action.

Ontario Supreme Court Justice T.E. Godson would preside over the commission and by September of that year his hearings were completed. He ordered the creation of a mine rescue agency with stations in Timmins, Kirkland Lake and Sudbury.  Hanley said the order deemed that the new stations would come into being in 1929 with assistance from Ontario's Workman's Compensation Board.

“Essentially  it outlines they agree that we would establish mine rescue stations, equip them  and appoint mine rescue officers to oversee training in the province,” said Hanley.

“The very first mine rescue station in 1929 was built in downtown Timmins,” Hanley added.

That factor comes into play on May 8 and 9 when teams from seven distinct mine rescue districts will be competing in the annual competition in mining towns across Ontario.

In Greater Sudbury this means that teams from the Sudbury and Onaping mining districts will put their skills and knowledge to the test in a mock scenario that will be carried out inside the darkened McClelland Community Centre in Copper Cliff.

Other mining districts include Timmins, Kirkland Lake, Thunder Bay-Algoma, Red Lake and the Southern District, which includes the salt mine  in Goderich, Ontario. Teams in all those districts will be competing in the same way on May 8 and 9, 20-19. They will all compete on the same mock disaster,   but the details will be kept secret for now.

As each district will produce a winning team next week, those teams will move forward to compete for the provincial mine rescue title. The provincial competition will be held at the Newmont-Goldcorp Red Lake Mine from June 4-7.

Len Gillis is the editor of the Northern Mining Solutions Journal.