Authentic cuisine will be the calling card of The Shawarma Shop 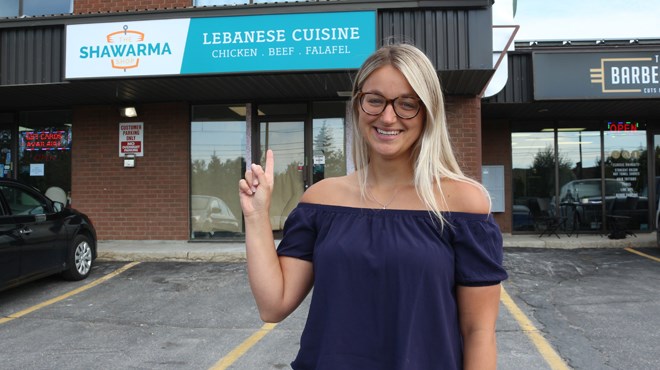 Sudbury entrepreneur Kelsey Cutinello is at it again, with plans to open her sixth business in the Nickel City in the coming weeks.

The Shawarma Shop is a joint venture between Cutinello and her fiancee, Trevor Miles, and will feature authentic Lebanese cuisine made from family recipes.

Cutinello is no stranger to starting a business in Sudbury and has her name stamped on local establishments such as Northern Axperts Axe Throwing Lounge, DIY Craftery and Lounge, La Fromagerie, The Barber Shop and her event planning company.

While she is taking on the role of business manager for The Shawarma Shop, she admits that credit for the vision for the shop belongs to her fiancee and his childhood best friend, Fadi Abdel-Nour.

"Trevor's been looking at doing this for 13 years, his best friend growing up moved here from Lebanon and Trevor ate all of his mom's food and fell in love with it," said Cutinello. "When we did our final menu tasting it was some of the best food I've ever had in my life, it was like coming home from my Italian family's dinner table, I was so full."

Out of the gate, the Shawarma Shop will feature a fairly small menu with plans to grow as the customer base expands and requests begin to come in for different menu items.

Anticipation has been building ahead of the shop's opening and the demand appears to be high for some alternatives in the city's food landscape.

"We posted to our Facebook page that we were starting renovations and we had almost 1,000 followers almost immediately," said Cutinello. "We've had people driving here already and asking if we're open because there really hasn't been too much of this type of food here before."

Thanks to having Trevor's childhood best friend Fadi and the recipes of his mother Hilda, the Shawarma Shop will be putting a real focus on authenticity when it comes to their menu items.

"Every culture kind of has their own version of what they call meat cooked on a spit, but it's the spices and the sauces that we put with it that defines it," said Cutinello. "Ours will be served on a Lebanese pita, not on a flatbread, not on a tortilla. If you've ever been to a shawarma place in Ottawa or Montreal, that's the flavour we're going for, the authentic Lebanese-style shawarma."

The shop will offer delivery via SkipTheDishes and will also offer catering options. Cutinello says that they will also be doing "shawarma drops" as a way to introduce Sudburians to the world of Lebanese cuisine.

"There's still people I talk to when I tell them about the shop who don't really know what shawarma is," she said. "We'll drop by local businesses with samples of the food to introduce them to what we have to offer."

The flexibility afforded to a locally-owned business is something that Cutinello loves and is what separates them from larger chain shops.

"We definitely want to start out small and really get good at the 'meat and potatoes' of our menu first," said Cutinello. "The nice thing about being locally-owned is that we can experiment with our menu, people can come in and make suggestions of what they'd like to see on the menu."

The Shawarma Shop is expected to open on the second-last weekend of September (21-22) and is located at 1210 Lasalle Blvd.