After being kicked out of Chelmsford Valley District Composite School last November, 14-year-old Jeremy often despairs when he thinks about his future. “It's bad,” his father, John, said.
Mar 15, 2012 5:55 PM By: Heidi Ulrichsen 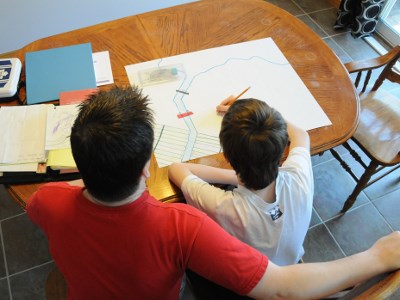 John helps his son Jeremy (names changed to protect their privacy) with school work at home. Since hitting a teacher in November, the autistic teen has not been allowed back to school. Photo by Marg Seregelyi

After being kicked out of Chelmsford Valley District Composite School last November, 14-year-old Jeremy often despairs when he thinks about his future.

The high-functioning autistic teen was sent home from school indefinitely after hitting one of his teachers.

At John's request, the father and son's real names are not being used in this article.

The challenges the family faces are echoed, to a greater or lesser degree, in the families of some 259 other autistic students who attend Rainbow District School Board schools, which faces its own challenges in supplying services to students with this increasingly-diagnosed neurological condition.

According to Autism Ontario, autism is a developmental disability, typically appearing in the first three years of life, that, among other issues, impairs a person's communication skills and ability to interact socially.

Difficulties in verbal and non-verbal communication and, consequently, in relating to others and the outside world, can lead to those with autism taking their frustrations out aggressively, on themselves or those around them.

There has been an “exponential growth” in kids diagnosed with autism over the last several years, Norm Blaseg, Rainbow's director of education and a former superintendent in charge of the board's special education programs, said.

In 2004, there were 30 kids diagnosed with autism attending Rainbow Board schools. Now there's about 260. Children with autism can vary from those who have a very hard time communicating to those with a type of high-functioning autism called Asperger's.

This has presented new challenges for school boards, which must create or adapt programs to suit the wide variances in the abilities and challenges of those with autism.

Rick Grylls, president of Autism Ontario Sudbury and District, said he often hears of parents of children with autism who are having difficulties working within the school system.

“There should be an open and accessible avenue to work within the school board's processes,” he said. “It shouldn't be a disciplinary action, but a supportive action to make sure that child gets what they need.”

Part of the process, Blaseg explained, is for the family and the school to work with clinicians, such as psychologists and psychiatrists, to construct behaviour safety plans for children who have a proclivity for violent or unruly behaviour.

Of course, the plan does not always work, and can only be as good as those tasked with implementing it.

“It takes a more special person to figure out how to intervene and accept some of the non self-regulated behaviours that may come out of a situation,” Blaseg said.

On the day he was kicked out, Jeremy's locker had been broken into, and his lock had been removed, so he carried his school bag with him.

During his lunch period, which the Grade 9 student spent in a supervised resource class, he asked if he could return his school bag to his locker, as he'd gotten a new lock from the office earlier that day.

His teacher did not want to allow Jeremy to leave the class, and they argued, John said.

Even though it goes against Jeremy's behaviour safety plan, the teacher kept on arguing with him, John said.

Because the teen's autism makes it difficult for him to express or deal with his emotions, high-anxiety situations can force him to lose control of his behaviour, and lash out. And, that's what happened.

“My son doesn't remember much after that,” John said. “I guess she got into his circle, and he ended up punching her in the mouth.”

Jeremy hasn't been back to school since this incident, and the school's principal has asked for a “written guarantee” from a psychiatrist that he's not going to hit anyone else, John said.

“A psychiatrist isn't going to give that guarantee, even for you and me,” he said. “He's definitely not going to give it to an autistic child. Hitting is very symptomatic of autistic kids. Their impulse control is not as strong as a normal person.”

John recently met with Rainbow District School Board representatives, along with representatives from Child Care Resources, a local organization which provides school support for children with autism.

He learned that Jeremy definitely won't be going back to school before next fall. The school board is working with Child Care Resources to set up a school program for students like Jeremy, something that John said he suspects might take years.

In the meantime, a Rainbow District School Board teacher comes into the family's home once a week to teach Jeremy there. He is still working to complete his credits from last fall, and won't be able to finish Grade 9 this year, John said.

This isn't the first time Jeremy has missed a significant amount of school.

When he was in Grade 4, he was placed in a regular classroom at Redwood Acres Public School for the first time, and ended up being kicked out of the school.

He was then placed at Gatchell Public School, which is a facility for disabled students, but the high-level of physical and cognitive disabilities of some of Jeremy's classmates proved hard for him to handle.

“I have the greatest empathy for these kids, but for my son, it completely freaked him out,” he said. “He was having anxiety attacks just out of the blue at home.”

John ended up pulling him out of school. The next year, when his son was in Grade 5, he was placed in another class at Gatchell — this time for children with behavioural problems. This situation did not work out either, and Jeremy was taken out of school again.

The next year, he was placed in an autism class at Chelmsford Valley District Composite School. Because he was actually old enough to be in Grade 7, he was placed at that grade level.

“He started to change for the good, making awesome strides with behaviour,” John said.

That all changed last fall when he started Grade 9. Jeremy didn't seem to get along with the teacher in his resource class, where he was supposed to receive extra help with his school work, John said.

He ran away from the class several times before the incident which got him kicked out of school.

John questioned whether the Rainbow District School Board has the ability to deal with autistic students. The board's solution to this problem seems to be suspending the students, John said.

Although he could not speak about Jeremy's case specifically due to privacy concerns, Blaseg did speak generally about the board's policies surrounding educating autistic students.

Just because an autistic child hits someone, it doesn't necessarily mean they'll be kicked out of school, Blaseg said. He understands, he said, that many autistic kids are frustrated because they can't communicate their emotions, and resort to violence.

The school board is doing its best to serve these kids through a wide variety of programs, he said.

If even more support is needed, the board can apply for funding to have two staff members working with one child, but Blaseg admits there's a backlog of children waiting for funding for this type of support.

In some “rare situations, where a child presents so many challenges that the interventions along that spectrum just haven't worked,” a teacher will travel to the child's home to provide instruction, Blaseg said.

“It's not anybody's goal to have that child hanging out there forever,” he said. “We want to get the child back into the school. We all know that when this child finishes Grade 12, they're going to be in society.”

At this point, the board normally has a clinician such as a psychiatrist or psychologist working with the child and their family to see what it will take to get them back into school, Blaseg said.

Much of what can be provided comes down to funding. In John's experience, there just isn't enough of it, he said. Autistic students are “totally underfunded, and there's not enough spots for the kids.”

The president of Autism Ontario Sudbury and District agreed. In general, Grylls said, there's a need for more resources for children with autism.

“There's overcrowding both in classrooms and in the waiting list for the extracurricular support given to children with special needs,” he said.

Meanwhile Jeremy is still at home, waiting to get on with his life. John said he worries what this is doing to his son, who is depressed and having a hard time sleeping.

“He's at the age where he was actually starting to enjoy school,” he said. “He had friends in some of his classes, and he really misses that.”