Award-winning teacher leads with her heart 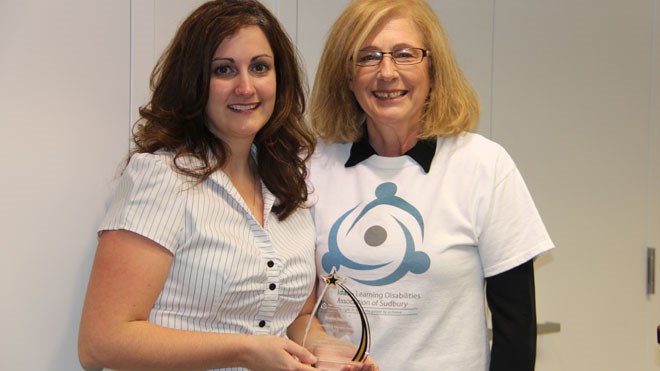 He recounts one incident where he was speaking with a child who was acting out, and Dusick suggested he take a different approach.

“She's done that many times,” Wachnuk said. “That's huge. Just her understanding of the kids at the school makes my job a lot easier and makes the kids' lives better.”

The principal was so impressed with Dusick's work that he nominated her for the Learning Disabilities Association of Sudbury's Outstanding Educator Award.
She was presented with the honour at the Rainbow District School Board's Oct. 29 meeting.

Dusick, who has been a teacher for 10 years, said she enjoys working with children who are struggling behaviourally and academically, and helping them to make the right choices so they can “succeed and grow.”

She said receiving the award is a bit overwhelming, because there's so many deserving educators out there.

“I feel like what I do every day is what good teachers should do,” Dusick said.
Wachnuk said he's thrilled his colleague received the award.

“She's so deserving. I wish I had more room to write (in the nomination). I could have just written pages on what she does for the school.”

Learning Disabilities Association of Sudbury Vice-Chair Rhonda Lenti was on hand at the meeting to present Dusick with the award.

Lenti, herself a retired teacher, said the best teachers are the ones who care about their students and lead with their hearts, and that's just what she sees in Dusick.

“Children trust you, and they know you care about them, and the academic stuff will come because of that relationship,” she said.

While Dusick is the Rainbow board's recipient of the Outstanding Educator Award, the Learning Disabilities Association of Sudbury will also present the award to a Sudbury Catholic District School Board teacher in the near future.

Lenti said the award is designed to raise awareness of learning disabilities, as well as the “incredible educators” who are making a difference in the lives of children who struggle academically.

“Teachers do impact children,” she said. “They make a huge difference. You need a few of those teachers when you're going to school. They'll shape you and change you and help you be successful.”