Bartolucci closes the book on a remarkable career

A giant in local and provincial politics by any measure, Sudbury MPP Rick Bartolucci closed the door on his political career Feb.
Feb 7, 2013 6:29 PM By: Darren MacDonald 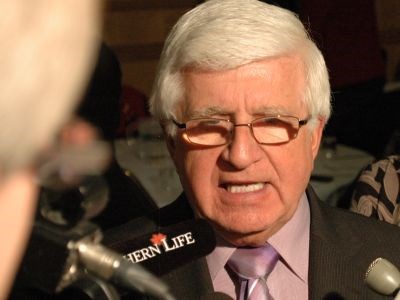 A giant in local and provincial politics by any measure, Sudbury MPP Rick Bartolucci closed the door on his political career Feb. 7, announcing he was withdrawing not only his name for cabinet consideration, but from politics as soon as a new election is called.

Speaking to about 200 supporters at the Caruso Club at noon, Bartolucci confirmed what most people had long expected: he was tired, wanted to spend more time with his family and was retiring from active political life.

“Today marks 19 years to the day that I met with a small group of Liberals, right here, at the Caruso Club, where it was decided that I would seek the Liberal nomination for Sudbury,” Bartolucci said. “Together, we have achieved great things for our community – achievements that, at one point, were dreams and goals to which we could only aspire.”

With his wife, Maureen, looking on, as well as his children, grandchildren and other relatives, an emotional Bartolucci said he took the decision after a Christmas trip to Florida with his wife.

“As Maureen and I walked on the beach through the warm sand, it became evident to the both of us that the time has come for me to move on from politics,” he said, his voice cracking with emotion. “I am announcing today that I will not be running in the next provincial election, whenever that may be. I met with Premier-designate Wynne last week to inform her of our family decision not to run.”

He will no longer be a cabinet minister effective Feb. 11, when Wynne will unveil her new lineup. But he will stay on as MPP until a new election is called.

Bartolucci reviewed a host of achievements he played a role in bringing to Sudbury during his tenure as a provincial cabinet minister in the government of Dalton McGuinty. They include the school of medicine, the school of architecture, progress in four-laning of Highway 69, funding to complete the one-site hospital, and more – almost $8 billion in funding over his term in office, he said. He credited much of his success to a strong work ethic and singular focus on serving his riding.

“For the past 18 years – and Maureen can attest to this – I have woken up every morning and wondered what I could do that day to make our community better,” he said. “Who would I meet with? Who would I be lobbying? Who would I be convincing that Sudbury is the best place to live, work and grow a family?”

His political career began in 1979 when he was elected as a city and regional councillor for Ward 5, where he served until 1990. He decided in 1994 to run for the Liberal nomination, which he won, and he became Sudbury MPP in 1995, defeating NDP incumbent Sharon Murdock.

He was a colourful member of the Opposition, and was known for using props and other stunts at his press conferences to attract attention to whatever agenda his was promoting. He introduced several private member’s bills, and was a tireless advocate for four-laning Highway 69 from Sudbury all the way to Toronto.

Despite supporting Dwight Duncan over McGuinty for leadership of the party, Bartolucci became a powerful cabinet minister and ally when McGuinty was elected premier in 2003. He served mainly as minister of Northern Development and Mines, although he spent time as minister of Correctional Services, beginning in 2007. His tenure there, however, was marred by controversy surrounding police actions during the 2010 G20 summit in Toronto.

After a narrow victory by just a few hundred votes in the 2011 provincial election, he returned to the Northern Development and Mines portfolio. When asked Feb. 7, Bartolucci said he’s proud of his entire record in government.

“No regrets -- I stand by every decision I ever made,” he said. “We worked as hard as we possibly could for the people we represented.”

During his time in office, he says Sudbury went from a have-not to a have community, with a jobless rate consistently below the provincial average, and often below the national average. He said between 2003-2012, more than $134 million in NOHFC money was spent in Sudbury in 784 projects creating 3,195 jobs in the process.

“We have surpassed our own expectations, despite challenges such as the global recession we’ve now come through,” Bartolucci said. “But we must never, never rest on our laurels. We must move forward.”

But it’s time for change, he said, and Wynne needs to bring in new people to try and renew a party that voters denied a majority in the last two elections. He’s leaving now to give the local riding association time to find a replacement candidate.

“I always said if I couldn’t give 100 per cent to the people who elected me, it was time to move on,” he told reporters. “And it was getting more and more difficult to give that 100 per cent ... Maureen and I decided we would bring this back to the family, and to a person, they agreed it was time.”

“As for motive, it is my strong realization that I want to focus on the one constant in my life – and that is the people who are most important to me,  namely, my family who are sitting here,” Bartolucci said.

“We should be proud of what we have achieved together. And I’ll never be able to adequately thank Sudburians for letting me be part of this incredible journey we’ve been on … Together, we’ve brought more to this community than ever before.”

He then thanked his family, staff, supporters, fundraisers – even the media. And he closed his announcement by quoting hockey great Wayne Gretzky.

He ruled out absolutely a return to municipal politics, shooting down persistent rumours that he was going to run for mayor. But he was a bit less equivocal about running federally.

“I will never say never because you will keep the tape and play it back to me,” he said. “I’m satisfied with the way the chapter is written. I’m almost 70 years old, and I want to spend more time with my family. My family deserves that. It’s time.

“(So) never say never. But never is never, in this instance.”