Lesley Andrew lists some of her many accomplishments, including earning university degrees in music performance and fine art, performing as a vocal soloist with orchestras around the world and acting with the Stratford Festival.
0
May 5, 2011 7:51 PM By: Heidi Ulrichsen 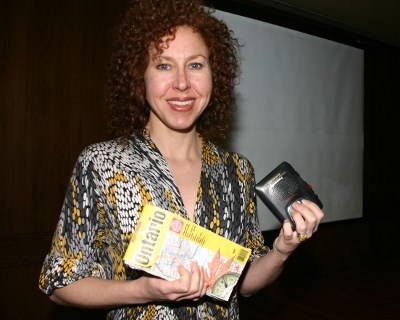 Lesley Andrew, a singer, artist and motivational speaker, shows off two items which have helped her deal with multiple learning disabilities. Because she has a hard time finding her way around, she uses a map whenever she travels. When she was in school, she used a tape recorder so she could review what the instructor said later. Photo by Heidi Ulrichsen.
Lesley Andrew lists some of her many accomplishments, including earning university degrees in music performance and fine art, performing as a vocal soloist with orchestras around the world and acting with the Stratford Festival.

Then she speaks about her early life, which was riddled with problems caused by multiple learning disabilities.

“I remember locking myself in the closet, not wanting to go to school,” Andrew said, speaking at Cambrian College May 5.

“I had few friends, and was chosen last for absolutely every sports team and group...Until the end of Grade 6, I could not read a word. I had extremely poor self-image, self-concept and self-esteem. I remember believing the whole world thought I was stupid.”

Andrew, who now owns her own production company and voice and drama studio in London, Ont., and often gives motivational speeches, was one of the keynote speakers at the Pathways Learning Disabilities Conference, which took place May 5-6 at Cambrian College.

The conference, focusing on learning disabilities and how they impact education, was co-hosted by the college’s Glenn Crombie Centre and Nipissing University’s counselling and disability services. It was open to students, parents and educators.

Andrew said her mother always believed she wasn’t stupid, and brought her to be tested for learning disabilities.

She was diagnosed with a number of issues affecting her learning, including vision and hearing problems, the inability to transfer thoughts into words or sounds into letters and dyslexia.

At the same time, she was also found to have above-average intelligence.

Andrew brought her audience through a number of strategies she has used throughout her life to overcome her learning disabilities, including carefully managing her time, bringing a tape recorder to every class, doing things she enjoys to raise her self-esteem and setting goals.

“It is possible to beat the odds that are set against you, but first, you need to make the choice to succeed,” Andrew said.

Andrew also spoke about how several teachers had a profound impact on her life.

“He said ‘You’re different. I think you might really enjoy being part of the drama society.’ So I did audition, and I was cast...One teacher changed my life forever. If he hadn’t said ‘Try it,’ I would not be standing here today.”

Susan Alcorn MacKay, director of counselling and disability services at Cambrian College, said she asked Andrew to speak at the conference because she “touches people’s hearts and makes them see the possibilities.”

“That’s what it’s all about — focusing on the positive rather than always on the negative,” Alcorn MacKay said. “I really wanted to set the tone of this conference with the positive message that you can be successful, that you’ve got to try.”

“(Andrew’s) stories are so real, and so meaningful to the students and to those who are dealing with barriers around learning disabilities,” he said. “To see the strategies and the creativity she uses to break down those barriers is very encouraging.”