A new arena, art gallery, main library – even a light rail transit system – are among the potential big projects that will get a public hearing Friday at an all-day session at city hall.
Nov 26, 2015 2:03 PM By: Darren MacDonald 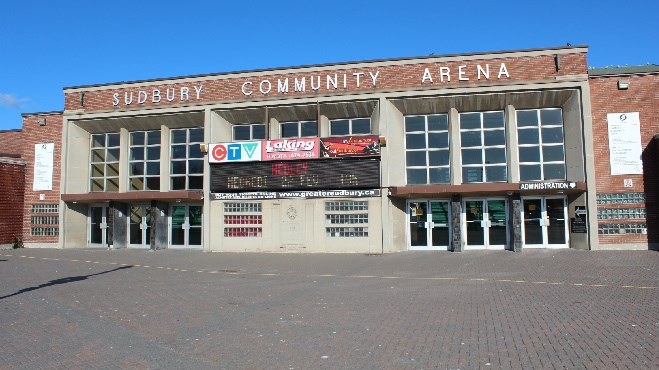 A public consultation process found the public wants the city to maintain the 13 arenas in Greater Sudbury, with one exceptions: Sudbury Arena, which most respondents said should be replaced. File photo.
A new arena, art gallery, main library – even a light rail transit system – are among the potential big projects that will get a public hearing Friday at an all-day session at city hall.

In all, 16 groups or individuals have signed up to make their 20-minute presentations at the session, which starts at 9 a.m. and runs until 5 p.m.

Some of the projects are familiar – such as plans for a Synergy Centre downtown, a new art gallery and a main library – but some of the ideas will get their first public airing.

They include a proposal for a new, $60-million sports and entertainment complex that would be built at the Jack Nicholas Business and Innovation Park on The Kingsway, east of Third Avenue. The 'True North Strong Centre' would be a P3 project, in which the developer would arrange all the financing, with the city providing city support and a long-term lease agreement.

On the other end of the scale is an idea from a private citizen for a light rail transit system for the city. While cost estimates are $19 million over three years, no funding sources are identified in the project proposal.

"At this point and time, that particular project seems very early on in its stage,” Mayor Brian Bigger said after Tuesday's council meeting. “I think this needs to be taken just as it's intended. It's a public input session. It's an opportunity for citizens to come forward with ideas they think are important and could improve our community."

A full list of projects can be found here.

Bigger said the session is an opportunity for the public and all of council to get an overview of projects councillors have been hearing about for a ling time.

"The whole intent of Friday's meeting is to bring the presentations and ideas that different community groups and individuals have been bringing forward to council for years,” he said. “Those discussions are largely in the background. And as a council, we're trying to move projects forward and I believe the best way to do that is to make the public aware of these projects and also to ensure all councillors and citizens all have the same information at the same time."

Bigger said this term of council is aiming to complete “a number of very significant projects through our term ... So bringing this information forward and sharing it with the public and having an open discussion about the opportunities for the city is the first step in moving these projects forward."

Information about the projects aired Friday will be passed on to Greater Sudbury Development Corp. staff for more analysis.

"They have the capacity to evaluate these projects and make recommendations to council on what steps they would recommend that we take in moving forward, and perhaps what the proper due diligence is on different types of projects," he said. "They're everything from P3 projects to projects that would be entirely funded by the city if they were to move ahead."

In addition to having the ideas examined by the GSDC, Bigger said he'd like to see some of the proponents combine forces in some form.

"Ideally, it will encourage partnerships among different groups that have ideas, and I can see opportunities for partnerships, with — no pun intended — synergies of different groups working together to develop a really sustainable business model for some of these ideas that they have," he said.

"So we'll get an idea of what is meant by a public library, an art gallery, an entertainment facility, a 'Place des Arts' type of project. These projects will have their 20 minutes of presentation in front of council."

City ironing out details on what Stage 3 reopening will look like in Greater Sudbury
Jul 13, 2020 7:00 PM
Comments
We welcome your feedback and encourage you to share your thoughts. We ask that you be respectful of others and their points of view, refrain from personal attacks and stay on topic. To learn about our commenting policies and how we moderate, please read our Community Guidelines.