Chamber: Popescu has filed his papers and followed the correct process to be included in Wednesday's debate
Oct 2, 2018 5:00 PM By: Matt Durnan 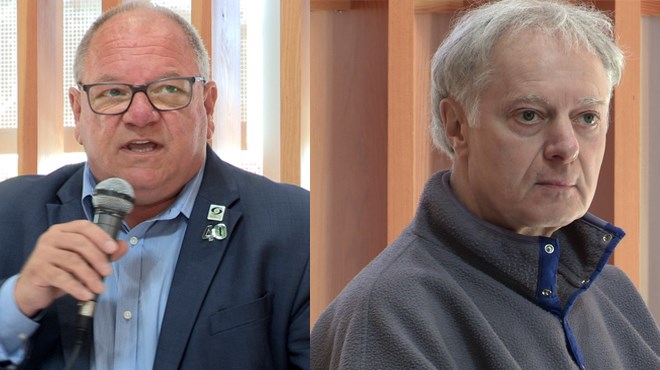 The Greater Sudbury Chamber of Commerce shut down incumbent mayor Brian Bigger's attempt to have a controversial candidate excluded from Wednesday evening's debate at Collège Boréal.

Bigger was calling for David Popescu to be banned from the upcoming Greater Sudbury Chamber of Commerce debate, and asked that his fellow candidates back that call, and for campaign event organizers to dis-invite Popescu from future events.

A perennial candidate for the past few election cycles, Popescu uses the campaign trail to spread his extreme brand of Christianity that is intolerant of, in particular, the LGBTQ community. Popescu has been sanctioned before for hateful comments, and charged for hate crimes in 2015 (charges that were dropped by the Crown) for offensive campaign material.

On Sept. 27 at the all-candidates event hosted by the Laurentian University Political Science Association, Popescu was cut off by the moderator a couple of times for comments that were dismissive of Indigenous culture.

"I'm disappointed in the chamber's decision. We are a modern and progressive city. There is no room for hate speech in any aspect of society. I hope those Chamber members who share my opinion will let the organizers know how they feel as well," he said.

Chamber of Commerce board chair Michael Macnamara will be moderating the debate and says that the decision came down to fairness, as Popescu is legally entitled to run and has filed his papers and followed due process to be included in the debate.

"We have always hosted an all-candidates debate and the fact that (Popescu) is a candidate means that he should be allowed to participate," said Macnamara. "We're a non-partisan organization so when it comes to a provincial or federal election and we're hosting an all candidates debate, even if they are a so-called fringe candidate, we do invite them to participate."

While the incumbent mayor had called upon his fellow candidates to support him in his move to have Popescu excluded from the chamber debate, a number of them have come out in support of the chamber's decision deny Bigger's bid.

"As a former journalist, freedom of speech is very important to me. I respect the debate organizers' right to choose the candidates they select to participate at their events," said mayoral candidate Patricia Mills.

"David Popescu is distracting by his presence at these debates due to his focused agenda, but you get past it and move on."

Candidate Jeff Huska says that he is in "full agreement" with the chamber's decision and that it is the responsibility of the moderator to keep candidates in line over the course of the debate.

"We have a democratic process and Mr. Popescu paid the fee, filled out all appropriate documents and had enough names to get nominated. He deserves a seat at the table," said Huska. "As much as it's a distraction at times I know what to ignore. If anything, Mayor Bigger has just given much more media attention to Mr. Popescu that he wasn't getting before."

When it comes to giving Popescu attention, Macnamara says he actually sees his participation at these debates as an opportunity for other candidates to shine.

"Obviously (Popescu) holds some extreme views, but when they're presented it gives the other candidates the opportunity to address and denounce them," said Macnamara. "I think it's important in a democratic society when someone presents a view that might be seen as intolerant or goes beyond being politically correct, it does really give the other candidates the opportunity to shine and to denounce those views."

Macnamara says he's aware of the opinion that Popescu's views and comments can diminish the quality of the debate, but it's not an opinion that he personally shares.

"The fact that those issues are addressed and confronted and denounced, in the end I think it results in a good thing," said Macnamara.

"I find most, if not all, of Mr. Popescu’s answers to questions to be completely off topic. As a result, I find that his comments serve to break the flow in discussions and debates," said Crumplin. "While I believe firmly in free speech, I find Mr. Popescu’s input to be distracting and, given his reputation, worrisome."

Candidate Cody Caciotti says that he is appalled by Popescu's recent behaviour and that his line of dialogue continues to cross the line. Caciotti will be holding Macnamara accountable for keeping the debate civil.

"I would expect any hosting organization to hold all candidates to the highest standards of civility and decency, and to maintain the principles of our Charter of Rights and freedoms that would keep any citizen from advocating and promoting genocide or spreading the wilful promotion of hatred," said Caciotti.

At the end of the day, Macnamara says that he only expects Popescu to speak for a maximum of 4.5 minutes (90 seconds to answer each of the three questions he is asked).

"Basically we ask three questions to each of the candidates and after that it's the audience members that submit questions," said Macnamara. "If my recollection serves me, he (Popescu) actually didn't get any follow up questions. His forum to the public consists of 270 seconds."

Long-term care facilities need to be overhauled, says carpenters' council
Jul 13, 2020 5:00 PM
Comments
We welcome your feedback and encourage you to share your thoughts. We ask that you be respectful of others and their points of view, refrain from personal attacks and stay on topic. To learn about our commenting policies and how we moderate, please read our Community Guidelines.