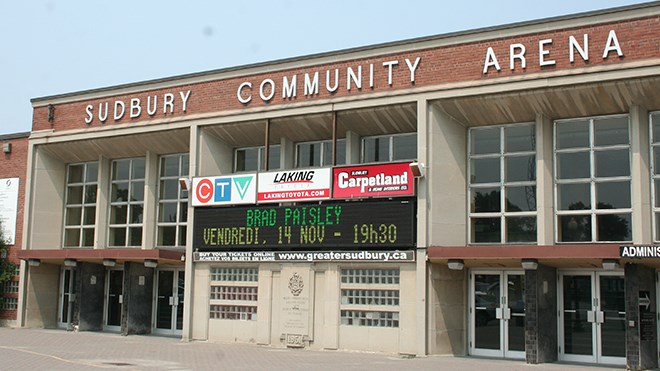 A new arena/events centre will be an important part of Sudbury's long-term economic development wherever it's built, says Dalron's John Arnold. And the best location would be downtown. File photo.

A new arena/events centre will be an important part of Sudbury's long-term economic development wherever it's built, says Dalron's John Arnold.

While Dalron was part of a proposal in November 2015 at city hall that would see a facility built on 50 acres the company owns in the South End, Arnold says the best location has always been downtown.

And the best location is downtown, Arnold said, both for taxpayers and the local economy.

While Dalron's South End proposal was mainly “a real estate play,” Arnold said it's more suitable than The Kingsway location put forward by Dario Zulich and his partners Perry Dellelce and Andrew Dale.

Zulich's group has proposed building the arena/events centre on land they own in the Moonlight Beach area, along with a hotel, a motocross park and possibly a casino.

Arnold said their South End site near the Southridge Mall is more centrally located and represents infilling rather than urban sprawl.

"I don't have any intention to build an arena or owning an arena -- I have no interest in that," he said. "All we wanted to do is suggest a good location, an alternative location in what I feel is a needed area in town, which is accessible to all the highways.

"The services are all there, the hotels are there, restaurants are in the area, it's surrounded by residential (homes). We look at it as a very solid location for this type of facility if it was to be developed."

A report from a consultant on the criteria the city should establish in an RFP for an arena is expected to be ready by the end of February. The actual RFP could go out a few months after that report.

"If it ends up being Hwy. 17 East? Great,” Arnold said. “But I don't think the consultant will come back and say that's the case.”

Other communities have found that the economic spinoffs from a new arena are the greatest when the facility is built in city's downtown, he said.

"That's been proven true in many, many cities," Arnold said. "And I think the consultant will probably arrive at that conclusion. The only issue will be the physical constraints and the cost constraints."

Ideally, he'd like to see the current rink re-purposed to house the art gallery, library or other big projects city council had identified as priorities. And the new arena should be built around the Minto Street area.

"I think they can all play off one another," Arnold said. "People worry about parking, but you can roll in parking structures when you're talking about a project of that size. And there are ways to address parking concerns people have. I think it makes a lot more sense to do it that way downtown than it does, even on our site."

Mass parking lots in rinks outside of downtowns create much bigger traffic jams than ones downtown he said, where parking is dispersed over a larger area.

"When it's in the downtown core, everything gets spread out, everyone goes their merry way and there are little to no traffic jams."

And rather than being twinned with a new arena, Arnold says the casino should stay in Chelmsford.

“And build the motosport park out there with it and Bob's your uncle,” he said. “The land is perfect for it."

While many people – in online comments, in particular – often say we should fix roads and other infrastructure rather than building something new, Arnold said developing amenities is crucial for the city to grown.

"We need to invest in our cultural infrastructure," he said. "If we are going to attract residents to this community, to move here and grow the tax base, we need these kinds of facilities more than we need nicer roads.

"Having those (cultural amenities) makes Sudbury more attractive for growth. And that, ultimately, at the end of the day, we need growth. Without growth, we're dead. Companies don't choose to go somewhere because of potholes. They choose quality of life, and that's a lot bigger than just roads."

Whichever site is picked, Arnold said Dalron will benefit, because it has properties across the city they can develop.

"So we've got a lot to gain, wherever this goes, because this whole community will benefit ... But we would all get the biggest bang for our buck if it goes downtown."

Hwy. 144 closed at Cartier due to a collision
Jun 1, 2020 7:55 PM
Comments
We welcome your feedback and encourage you to share your thoughts. We ask that you be respectful of others and their points of view, refrain from personal attacks and stay on topic. To learn about our commenting policies and how we moderate, please read our Community Guidelines.