Bike helmets for all ages should be mandatory, according to review

Bike helmets for people of all ages need to be mandatory, according to the Office of the Chief Coroner for Ontario in the Cycling Death Review.
Jun 18, 2012 6:21 PM By: Sudbury.com Staff 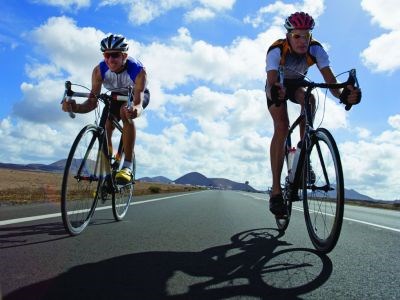 Bike helmets being mandatory for cyclists of all ages is one of 14 recommendations from the Office of the Chief Coroner following a review of 129 cycling-related deaths in the province. File photo.

Bike helmets for people of all ages need to be mandatory, according to the Office of the Chief Coroner for Ontario in the Cycling Death Review.

Furthermore, those cyclists whose cause of death included a head injury were three times less likely to be wearing a helmet than those who died of other types of injuries.

The review, which targets infrastructure, education, legislation and enforcement, was undertaken as a result of concern, both from the public and within the Office of the Chief Coroner, surrounding the issue of cycling safety, Dr. Andrew McCallum, Chief Coroner for Ontario, said after releasing the review.

In Ontario, helmet use is optional for cyclists age 18 and older. Helmets are mandated under the Highway Traffic Act below the age of 18, and parents are responsible for ensuring that helmets are used by their children below the age of 16. Mandatory helmet legislation for all ages would be subject to an evaluation of the impact of this legislation on cycling activity.

The review also found that drivers of a motor vehicle involved in the crash are less likely to be at fault for causing it.

In 44 cases, or about 34 per cent of the time, where a cyclist collided with a motor vehicle, it was the cyclist alone who was at fault for causing the collision, according to the review.

On the other hand, in 33 cases, or about 25 per cent of the time, the driver of a motor vehicle alone was found to be at fault.

One of the hypotheses of the review was that all cycling fatalities are preventable, and that hypothesis held true in each and every death reviewed, according to researchers.

"As a Chief Coroner’s review, we by definition confined our analysis to fatalities; However, we recognize that cycling deaths are just the tip of the iceberg," the review panel stated in the report.

In 2009, more than 26,000 people in Ontario visited a hospital emergency department for treatment of an injury sustained while cycling. Undoubtedly, countless more were injured but did not require medical treatment. Each of these injuries represents a potential fatality – an incident where, had the situation unfolded slightly differently, a death might have occurred, according to the report.

Other recommendations stemming from the review include the adoption of a “complete streets” approach – focused on the safety of all road users - to guide the redevelopment of existing communities and the design of new communities throughout Ontario.

It also suggests the development of an Ontario Cycling Plan to guide the development of policy, legislation and regulations and the commitment of infrastructure funding to support cycling in Ontario, as well as a comprehensive cycling safety public awareness and education strategy, starting in public schools, and continuing through the purchase of every new and used bicycle and through driver’s licence testing.

Further to that, it recommends legislative changes to the Highway Traffic Act, Municipal Act and relevant municipal bylaws aimed at ensuring clarity and consistency regarding interactions between cyclists and other road users, as well as the establishment of a “one-metre” rule for vehicles when passing cyclists.

Prioritizing the development of paved shoulders on provincial highways and mandatory side-guards for heavy trucks are also suggested in the review, as is the enforcement, education and public safety activities targeted to the specific issues of cycling safety identified in a given community.

One way to promote cycling is to take steps to enhance safety for cyclists, according to the report. Not only is such an approach logical, it has been proven to be effective in a number of jurisdictions around the world. For examples, studies in Denmark have shown that providing segregated bicycle tracks or lanes alongside urban roads reduced deaths among cyclists by 35 per cent. In the state of Victoria, Australia, a new law requiring helmets in 1990 increased the use of helmets from 31 per cent to 75 per cent within one year and was associated with a 51-per-cent reduction in head injuries to cyclists.

In the United Kingdom, fatalities and injuries among cyclists colliding with heavy trucks decreased by 5.7 per cent and 13.2 per cent, respectively, after the introduction of truck side-guards. Fatalities among cyclists who collided with the sides of these trucks were reduced by 61 per cent.

“I am very pleased with the report in that it clearly shows just how preventable cycling deaths are,” Dr. Andrew McCallum, Chief Coroner for Ontario, said in a press release. ”Awareness and respect for the rules of the road by all road users are integral to preventing these deaths.”

Dr. Dan Cass, Deputy Chief Coroner, expressed his appreciation to all of the members of the public who wrote to him with their comments, suggestions and in some cases, tragic stories.

“It was extremely helpful for my colleagues and I to read the public submissions, many of which were not only helpful from a research perspective, but from a personal perspective as well,” Cass said.

“Clearly, cycling safety is an important issue for Ontarians,” Patrick Brown, a lawyer who participated in the review representing a coalition of cycling advocacy groups, including Cycle Toronto, said. “We believe that if these 14 recommendations are implemented, it will save the lives of many cyclists in Ontario, and will allow so many more people to enjoy the great benefits of cycling by providing a safer cycling environment.”

Bob Chiarelli, Minister of Transportation, said the province will be carefully reviewing the recommendations and will consider timelines and budgets. Over the summer, the province will consult with members of the cycling community and its municipal partners to finalize the policy.

“I would like to thank Dr. McCallum, Chief Coroner of Ontario, and Dr. Dan Cass, Deputy Chief Coroner-Investigation for their thoughtful advice and recommendations on how to improve cycling safety in Ontario. Our thoughts are with the families who have lost loved ones.

“We know how important cycling is for all Ontarians as a way to travel and as part of a healthy, active lifestyle,” Chiarelli said, in endorsing the principles in the recommendations. “That's why we are moving forward with updating our cycling policy. Our government will continue to support community-based cycling education programs, pave shoulders where it's safe and practical and look at ways to keep cyclists safe on our roads.”

Findings of the review:

There were 129 deaths examined in this Cycling Death Review, 86 per cent (111 of 129) of those killed while cycling were male.

Children represented a smaller, but significant, portion of cycling deaths. A total of 19 deaths (15 per cent) occurred in those aged 19 and under; eight of those (six per cent) were in children aged 14 or under.

The peak months for cycling fatalities were July, August and September (46 per cent).

The vast majority of cycling deaths occurred during clear weather, on dry roads, with good visibility. More than half (69 of 129; 53 per cent) of the fatal cycling collisions occurred in daylight conditions.
The peak time for fatal collisions (25 of 129; 19 per cent) occurred between 8-10 pm.

Check back to Northernlife.ca for more on this story.