Billboard accuses Rainbow board of '#SelfishMath' 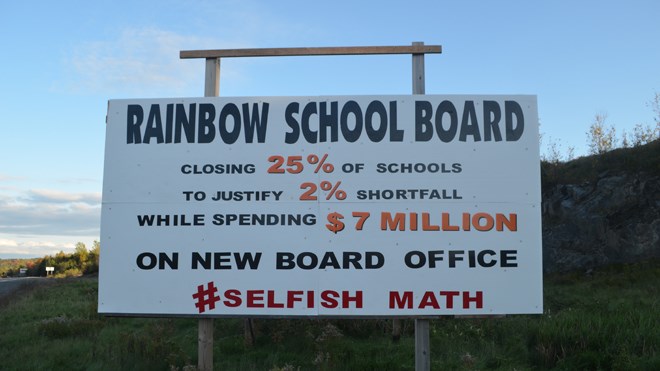 A billboard referring to the Rainbow District School Board's plans to close 12 of its schools has appeared on Highway 17, close to the turnoff to Highway 144. Supplied photo.

A billboard referring to the Rainbow District School Board's plans to close 12 of its schools while opening a new board office has appeared on Highway 17, close to the turnoff to Highway 144.

The sign reads as follows: “Rainbow School Board closing 25% of schools to justify 2% shortfall while spending $7 million on new board office #SelfishMath.”

The new board office the sign mentions was approved last December, and will involve a $7.3-million renovation of the former Wembley Public School to create a new Centre for Education.

It will consolidate the services currently provided at the board's office downtown — which will be sold — as well as support services now based out of Lo-Ellen, Lively, Lockerby and Chelmsford high schools and at Northeastern Elementary School.

The project is supposed to be completed in August 2018.

Besides being mentioned on the billboard, the board's plans to create a new Centre for Education have been a hot topic of conversation on Facebook chat groups created by parents fighting the school closures.

Chantelle Gorham, whose seven-year-old daughter attends Larchwood Public School, one of the schools on the chopping block, posted a photo of the billboard in question on Facebook.

She told Sudbury.com she finds the board's plans for the Wembley site “simply infuriating,” given her child's school may close.

Gorham said she's heard the new facility will even have a fitness room. “It appears they've spared no expense,” she said.

Rainbow board director of education Norm Blaseg said he wants people to realize that by consolidating the board's support services at the Wembley site, the board's actually saving operational dollars in the long run.

He said the money the board is spending on the renovations are earmarked for capital costs, and can't be spent on operational expenses.

In considering closing so many of its schools, the board is looking to save operational dollars, as it's facing cutbacks from the province, he said.

“To start establishing thinking that is based on misinformation, it's not correct, not creative, and not helpful,” Blaseg said.

“We have received many, many emails and phone calls, offering some really great ideas. But when you're constantly trying to lay blame or shame, that's not constructive.”