Black Friday a social, as well as a shopping, event

Black Friday is a day when people line up in the wee hours of the morning in hopes of getting a deal. It's a day when U.S. networks invariably have footage of people being trampled – or worse – when malls open for business.
Nov 26, 2015 9:29 PM By: Darren MacDonald 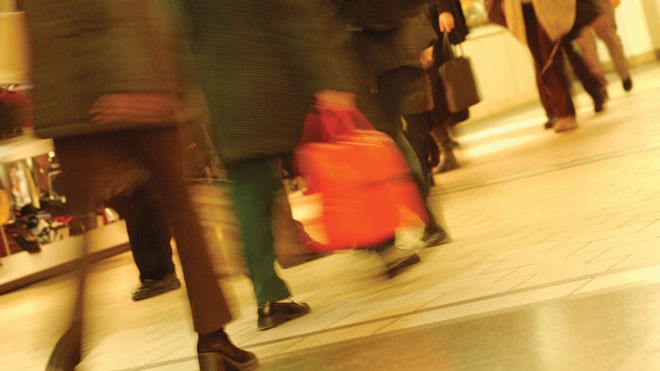 With voter turnout at just over 51 per cent, it looks like Greater Sudbury business owners and shoppers will finally be given a choice in when they get to shop.
Black Friday is a day when people line up in the wee hours of the morning in hopes of getting a deal. It's a day when U.S. networks invariably have footage of people being trampled – or worse – when malls open for business.

In Sudbury, retailers big and small have specials on in anticipation of the crush of hopeful shoppers getting ready to pounce.

Brian Vendramin, marketing professor at Cambrian College, said the day has an impact on the economy, but not an entirely positive one.

"People have been calling it 'Slack Friday' because 1.2 million Canadian are going to call in sick, and another 6.4 million plan to take a vacation day,” Vendramin said. “So there's certainly going to be a big dip in productivity."

He says Black Friday has become a social event, with friends getting together in the days before to research deals and decide a strategy.

"There is an expectation that they will get a good deal, and it's part of a social aspect, too, right?” Vendramin said. "Clearly there is that feeling of, 'I belong,' because we're going with a group. So it's social.

“I would say that tonight will be a busy night around the table. They'll have all the Northern Life flyers spread out, people will be mapping where they want to go."

In practical terms, he said it's important that shoppers plan ahead as much as possible, so they don't spend more than they can afford.

"Have a plan of attack and have a budget,” Vendramin said. “If you're buying online, use a credit card that has a lower credit limit. Stick to your budget, because it's easy to get caught up, then in January when the bills start coming in, then there's more hardship and stress."

Pressure may ease a little at malls this year because many retailers are getting a jump on Cyber Monday, when discounts similar to Friday are available online.

"Ideally, it's going to be a little bit better for consumers this year because many of the stores are offering the same deals online, on the Friday,” he said. “So they don't have to wait until Cyber Monday."

The day has become so important to retailers that many plan ahead, buying bigger quantities of items they know will be popular items on Friday.

"They purchase goods they know that customers want at a reduced price,” he said. “And clearly, as we get into the last week of November, they may be looking at their inventories. I know that in the clothing business, because we haven't had a lot of cool weather, and in the footwear business, we haven't had a lot of snow, they may be finding that they are a little heavier or deeper with inventory than they want to be, so they may select items there that they would put on sale."

While still early, Vendramin said most retailers he's talked to are bullish on the holiday sales season, but there's caution out there, too.

"Talk about lower commodity prices that have people a little worried,” he said. “And the Canadian dollar hit an all time low this week."

That could mean instead of buying several gifts, people could settle on family gifts – one big item everyone can share.

"The big-screen TV, or maybe the Xbox or the the vacation during March Break or something like that."

While big box stores and other major retailers get a lot of attention on Black Friday, Vendramin hopes they visit local businesses, too, most of whom will be offering deals, as well.

"These are the people who are in our community 12 months of the year, who do all kinds of things for our community, in terms of donations and helping out,” he said. “So it's a way for you to get a good price, but also support our local economy."