Group says it will be presenting a list of demands on that day to address ‘institutional and systemic racism’
Jul 24, 2020 5:00 PM By: Keira Ferguson, Local Journalism Initiative reporter 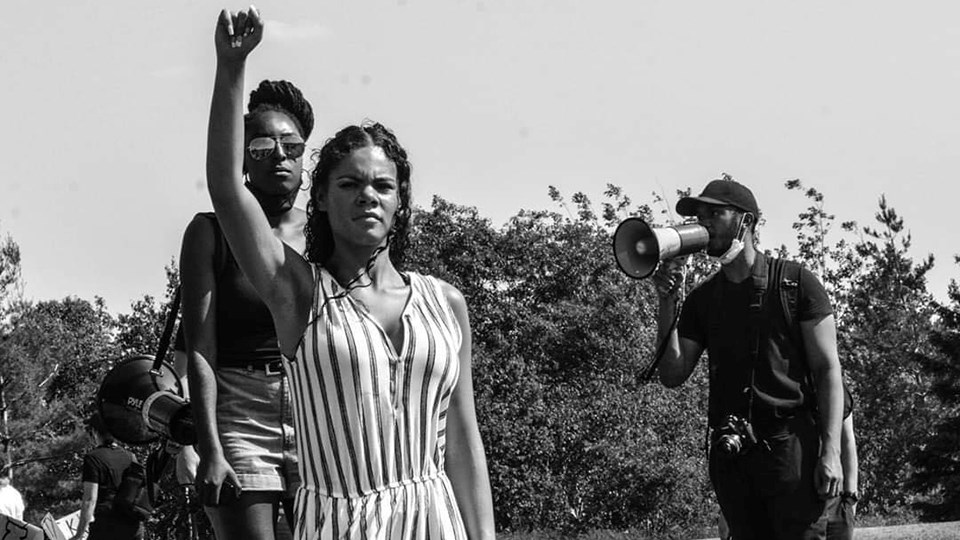 Black Lives Matter (BLM) Sudbury says it will present a list of demands to address “institutional and systemic racism’ in Greater Sudbury during a sit-in to be held July 26, the anniversary  of what is considered the first race riot in North American history.

The demonstration on July 26 outside Tom Davies Square falls on the anniversary of the Shelburne Race Riots, which began July 26, 1784, when 40 white Loyalist settlers in Nova Scotia armed with hooks and chains demolished the home of a Baptist preacher, David George, as well as that of 20 other free Black people living on his property.

The rioting by white Loyalists continued over a span of 10 days in Shelburne and is considered the first race riot in North America’s history.

This date was chosen not only to raise awareness of an event of historic racial injustice, said BLM Sudbury co-president TiCarra Paquet, but also to demonstrate that the fight for racial equality and racial justice in Canada has been a long one, stretching back even before Canada was its own country.

As part of Sunday’s demonstration, BLM Sudbury plans to release “a list of demands” that Paquet said will touch on a wide array of sectors, but focused on issues faced by racial minorities in Greater Sudbury in particular.

“Our list of demands focuses on institutional and systemic racism that is apparent in Sudbury, whether that be in education, the criminal justice system, and the media itself,” she said.

The July 26 event comes as BLM Sudbury transitions from a grassroots activist collective to a formal chapter of the international BLM movement. The transition also means more formalized leadership roles for the local chapter, including publicly identifying who those leaders are, something group members originally said that they would avoid doing for the safety of all involved.

As such, Paquet has been named co-president of BLM Sudbury alongside another activist, Ra’anaa Brown. Becoming an official chapter also means the local BLM group can connect with and grow alongside other BLM groups in Canada and beyond.

The BLM Sudbury executive team is composed of people of both African and Caribbean descent, Paquet said.

Allies and individuals of other ethnicities are welcome to join the group as part of the organizing committee, she said, but the executive team will be restricted to Black individuals indefinitely.

Other changes to BLM Sudbury are to be announced Sunday, she said.

The July 26 event will begin at 2 p.m. with a march from Memorial Park to Tom Davies Square. Attendees will then be led in the creation of a chalk design, listing the group’s demands, as well as another activity that she said the group would prefer to reveal that day.

But Paquet said no activities are overly strenuous or physically challenging.

The only thing guests would need to bring to prepare would be chalk, a face covering, signage, and their voices, she said. Water will be provided.

Sunday's event will be the fourth demonstration held in the Nickel City to address racism and police brutality, one of countless similar events held in the U.S., Canada and beyond in the wake of the death of 46-year-old George Floyd in Minneapolis, Minnesota, who died on the street May 25 as a Minneapolis police officer knelt on the back of his neck. That officer, Derek Chauvin, has since been charged with second-degree unintentional homicide (as well as numerous counts of tax evasion).

Hundreds of Sudburians turned out to rallies and demonstrations held May 31, June 3, and June 19, and a sit-in on July 2, in support of the movement.

The support the local movement has received has been strong, said Paquet, and greatly appreciated. They hope to see that support continue this Sunday and at future BLM events.

“Those who came out to previous events, don’t stop coming to events. We still need your support. This is the civil rights movement of 2020, and we want many people to become a part of this moment in history,” Paquet said.

“These little events are going to be in the textbooks years from now, just as the civil rights movements of the ’50s and ’60s are.”

BLM Sudbury is also planning a demonstration to honour the anniversary of Martin Luther King Jr.’s “I Have a Dream” speech during the Aug. 28, 1963, March on Washington for Jobs and Freedom. Details of this event have not yet been finalized.