BLM panelists: Treat us as artists, not Black artists

Up Here panel discussion delves into the experience of Black women artists in light of the attention on the Black Lives Matter movement since the death of George Floyd
Aug 17, 2020 5:00 PM By: Vicki Gilhula, Local Journalism Initiative reporter 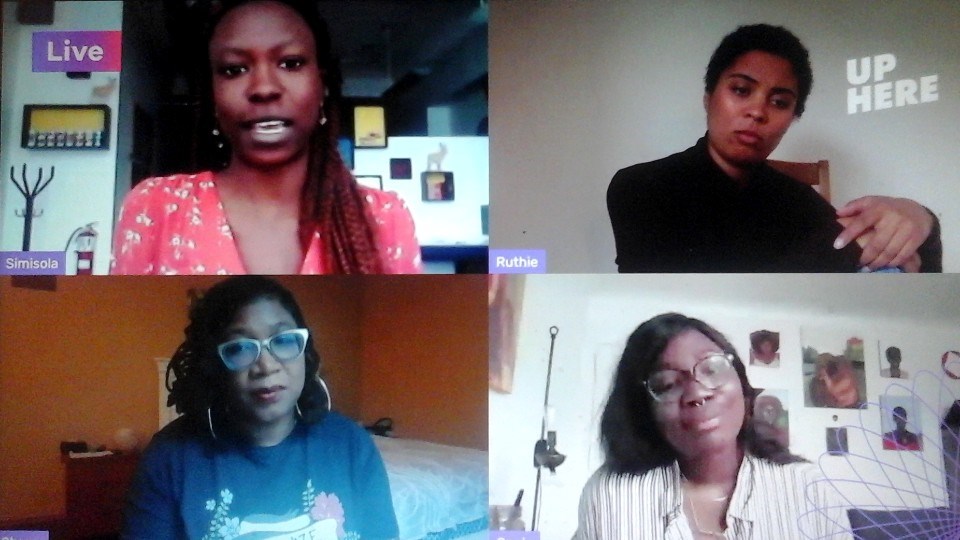 Moderated by Shana Calixte (bottom left), a public health manager, professor and activist, Up Here hosted a virtual panel discussion with three Black female artists on the weekend. They were (clockwise from top left) Simisola Tayo, a dancer and choreographer, Ruthie Knut, a singer, dancer and actor, and Sonia Ekiyor-Katimi, a freelance artist with a masters in architecture. (Screen capture)

The artists who participated in a live chat on Facebook and YouTube about experiences of Black people in the arts, this past Sunday, said they appreciate the attention they’re getting as a result of the Black Lives Matter movement, but they would prefer to be recognized for their art and not the colour of their skin.

“Black artists need to be seen as individuals,” said Sonia Ekiyor-Katimi, a visual artist and a graduate of the McEwen School of Architecture. “Don’t see everyone as a spokesperson for the movement.”

Her paintings are not necessarily representative of African art nor do they all have political messages.

She and the other two women artists on the panel — dancer and choreographer Simisola Tayo and actor Ruthie Nkut — said they feel pressure to create art with a message about the Black experience, whether they want to or not.

“Our tragic history is not all who we are. I prefer to paint ‘normal things’ like people falling in love instead of a protest. I am not trying to be political. I don’t want to lay it on thick,” said Ekiyor-Katimi.

The virtual panel, a presentation of the Up Here Festival, was streamed on Facebook Live and YouTube Live and mediated by Shana Calixte, a public health manager and professor at Thorneloe University.

Education about Black peoples’ role in Canadian history and exposure to their art will help attract a broader audience while providing a role model for the next generation of artists, said Nkut.

During the one-hour discussion, the artists agreed the contributions of Black people, their cultures and their art should be part of the mainstream and not just something ghettoized during Black History Month or as a cause of the moment.

Nkut took part in the reading a play about Nova Scotia’s Africville recently.

She was approached by a boy who had never seen Black people perform and was unaware theatre was something he might pursue.

“For me, it  is about art outreach and getting more people on stage doing it.”

The actor has performed with YES Theatre, and in 2019 in “The Color Purple” at the Neptune Theatre in Halifax.

Ekiyor-Katimi’s advice to young Black artists :Be true to yourself and don’t worry about being liked.

“People may be uncomfortable with your art, but allowing them to see it will allow them to become more comfortable,” she said.

Brown said the discussion was not the beginning or end of an issue that started with slavery, but “a moment in time.”

Reached after the discussion, Ekiyor-Katimi praised the honest comments from the women artists.

“I felt validated the other women feel the same way. It was freeing to have a place to discuss racial injustice.”

The virtual version of the 2020 Up Here urban art and music festival was held this past weekend. In the coming week, watch for mural installations in the city by Brown and Ekiyor-Katimi.