Giroux's tenure at HSN to begin in October

Hospital says board was unanimous in choosing LU president to head up the hospital
Apr 26, 2017 12:06 PM By: Sudbury.com Staff 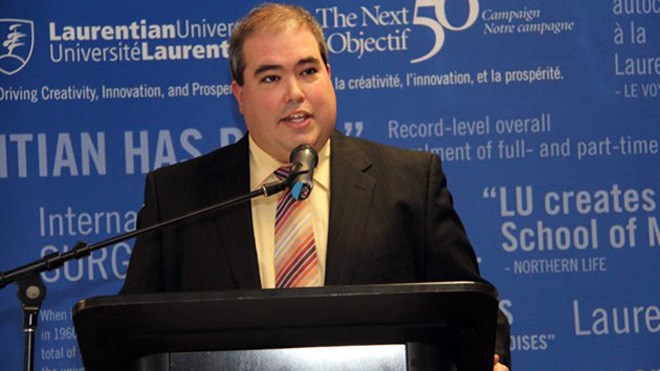 Dominc Giroux, the president and vice-chancellor of Laurentian University, has been named the new CEO of Health Sciences North. (File)

Dominic Giroux, the president and vice-chancellor of Laurentian University, has been named the new CEO of Health Sciences North.

In the release, the board of directors of HSN and HSN Research Institute state Giroux will officially take over as of Oct. 2, 2017.

According to the release, Giroux was the unanimous choice.

“Today marks an exciting new path for HSN and HSNRI,” Nicole Everest, chair of the HSN and HSNRI boards of directors, is quoted as saying. “With Greater Sudbury positioning itself as a hub of health excellence, we were seeking a CEO with a proven track record of delivering results, along with experience in an academic environment to advance our teaching and research missions.

"We feel we have found that and much more in Dominic, and we’re excited about the opportunity to bring HSN, HSNRI and northern Ontario to the next level."

Giroux’s last day at Laurentian will be Aug. 18.

Following his departure, the university board has named Dr. Pierre Zundel, LU's current vice-president academic and provost, to serve as interim president and vice-chancellor until June 30, 2019.

The search for a new president won't be initiated before the summer of 2018, the release states, with expectations the new president and vice-chancellor will be appointed in December of that year.

Giroux has served as the 10th president of Laurentian since April 2009. Currently, serving his second five-year term, he was to remain as president and vice-chancellor of the university until June 2019.

The man himself called the decision to leave Laurentian "the most difficult decision I have ever made."

"Ultimately, the opportunity for our family to remain in Greater Sudbury, serving our community, taking on new exciting challenges leading two great organizations with already high-quality teams in place during a transformational time for health care, was too great for me to pass up," he's quoted as saying.

The press release lauds Giroux’s leadership of the school since 2009. With him at the helm, five new buildings were constructed and major renovations were undertaken, totalling $206 million. The school also managed to secure $80 million in private gifts and $64 million in government infrastructure investments.

According to the release, enrolment numbers at LU reached record levels, even as the average entry grade increased. National Tri-Council research funding more than doubled, as did the number of Indigenous faculty members. Laurentian now ranks among Canada’s Top 10 primarily undergraduate universities on Maclean’s rankings.

A master fundraiser, under Giroux's leadership, in 2011 Forbes & Manhattan CEO Stan Bharti gave $10 million to the renamed Bharti School of Engineering. One year later, Don Goodman, CEO of Dundee Corp., did something similar for the School of Mines, which was subsequently renamed in his honour.

In 2013, Laurentian opened Canada’s first new architecture school in 40 years. In June 2016, it was renamed the McEwen School of Architecture after Rob McEwen, CEO of McEwen Mining and former CEO of GoldCorp, and his wife, Cheryl, made a $10-million donation.

Then in September 2016, Franco-Nevada CEO David Harquail gave, through his family’s foundation, $10 million to the Department of Earth Sciences, which was then re-christened the Harquail School of Earth Sciences.