Brewers Loft: More than condos, this is an urban art project

Plans for redeveloping the former Northern Breweries building on Lorne Street go beyond renovating the structure to accommodate 50 condos, says the developer behind the project.
Jun 12, 2015 4:24 PM By: Sudbury.com Staff 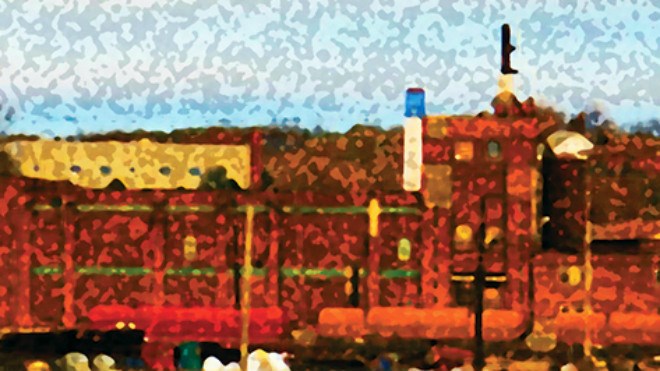 Photograph taken by Jorge Cueto from atop the Kelly Lake Building Supply. Supplied photo.
Plans for redeveloping the former Northern Breweries building on Lorne Street go beyond renovating the structure to accommodate 50 condos, says the developer behind the project.

Greg Oldenburg, who bought the building last year and announced plans to create The Brewers Lofts, unveiled details this week of his plan to create “a centre for creative people.”

"This will be an architectural gem, probably one of the nicest buildings in the city," Oldenburg said, of the $12-million project."I count Science North and the Superstack as contemporaries of this place."

For example, hallways in the building will be patterned on the the miner's lunchbox, a made-in-Sudbury design. He's also partnering with the people behind We Live Up Here to create something unique on the outside.

"The two of us will be working together on the public art project that's going to exist on Alder Street," Oldenburg said. "I do want to encourage the local street art community to think about what they might want to do here."

The installation could include sculpture, painting and light designs. He's also offering a $5,000 prize in a contest to help design landscaping around the building. Vegetation native to the North and that's relatively low maintenance is what Oldenburg said he's looking for.

The unique nature of the outside of the building extends indoors, too. Buyers of the $200,000-$450,000 condos can have a say in how their unit is built – how many bedrooms, how and where the rooms are located, etc.

So far, he has commitments for 13 of the 50 condos, with more expected to be sold this week during an open house event.

"There's a real opportunity for those who come in early to actually influence the layout of the interior."

Oldenburg also announced that Stack Beer is the official beer of the building, meaning the beer kegs that will be incorporated into each unit “will be from Stack."

The building will also be part of the hub for this summer's Upfest, an art and music festival debuting in Sudbury in August.

Oldenburg is also donating a 460-square-foot unit to Laurentian University for two students in the School of Architecture to live in the building "forever more."

"The school will come up with some sort of mechanism to choose the two students," he said.

He's also working with We Live Up Here to produce periodic magazines documenting the evolution of the building from abandoned brewery to transformed living and art space.

Photographer Jorge Cueto published a book in 2010 featuring pictures of the abandoned interior and exterior. He took more photos last spring when Oldenburg was beginning to work on the building, and was on hand Wednesday to take another round of photos as the project moves into the next stage.

He hopes to begin construction next spring, a process he says will take 16-17 months.